Kosi: Ghosts Appearing Through The Sound

By ROGER FARBEY
September 7, 2015
Sign in to view read count 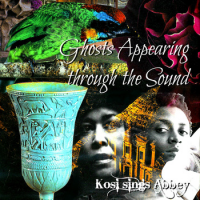 This is the third album by New York City based vocalist and songwriter Kosi (neé Akosua Gyebi). Ghosts Appearing Through The Sound is a tribute to one of Kosi's main influences, Abbey Lincoln, her other chief influence being Nina Simone. All ten tracks have a connection with Lincoln being either wholly or co-written by her.

"Learning How To Listen" is a delicate ballad, showcasing Kosi's plaintively soulful voice accompanied just by guitar -and benefits from an excellent solo from guitarist Aron Marchak. John Coltrane's "Africa" with lyrics by Lincoln swings like a mother with a cracking tenor solo. Kosi's voice hits home with spine-tingling results and the song effortlessly conjures up the ghosts both of 'Trane and Lincoln.

With the voice accompanied only by tenor sax, "Driva Man" taken from Max Roach's seminal We Insist is a reminder of the stinging protest album rendered all the more poignant by the eloquent lyrics. By contrast, the relaxed ballad and longest track at nearly ten minutes "Down Here Below" is given a sumptuous treatment with a trio accompaniment and a virtuoso piano solo, the singer dramatically wrenching out the lyrics.

"Caged Bird" is a lighter affair with vocal harmonies and guitar accompaniment, whilst the classic "Blue Monk" is given a breezy vocal interpretation with just double bass accompaniment. The vocals on "Wholly Earth," here again with a piano trio, deliver a powerful punch whilst the smouldering 12 bar blues "Hey Lordy Mamma" is a version written by Nina Simone and Abbey Lincoln and provides an excellent vehicle for Kosi's emotionally charged voice. There's some great guitar from Aron Marchak whose deft solo work equals his talent as an accompanist of which more can be heard on the gentle acoustic version of "Down Here Below."

Accompanied only by Domagoj Miskovic on classical guitar, Kosi once again demonstrates her vocal breadth and versatility on the achingly beautiful Villa Lobos finale, "Prelude: A Wedding Song," with words written by Abbey Lincoln. The overwhelming characteristic of this album is one of raw emotion, and delivering it is a talent in which this singer simply excels.