Stevens, Siegel & Ferguson: Get Out of Town

By LARRY TAYLOR
January 8, 2008
Sign in to view read count 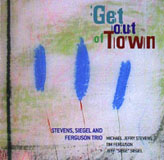 Get Out of Town features one of many unheralded groups out there which begs to be heard—three relatively unknown musicians in a trio setting who have been working together for some 18 years.

Michael Jefry Stevens on piano, Jeff Siegel on drums and Tim Ferguson on bass—veterans of the New York scene—make up this cooperative trio. Their time as a unit shows in the cohesive arrangements, which give each ample solo time to show off their talent.

Get Out of Town includes five standards, along with four originals, each displaying their compositional expertise.

The band's originality is heard immediately in both the hard-edged, spiky arrangement of "Get Out of Town, and the catchy rendition of "Jeepers Creepers, with its fugue-like beginning and ending, as well as Ferguson's standout bass.

Ferguson's "Momentum gives his bass room to shine, as he puts down a Latin beat. Utilizing his consummate technique, his momentum steadily increases, buoyed by the steady piano and drums. Siegel's "Stealth again shows off his excellent cymbal work as he pushes Stevens' repetitive and hypnotic chordal progressions.

Siegel's serene "Peaceful is highlighted by Ferguson's bowed bass, a solid pillar off of which Stevens bounces a filigree of notes. The delicately swinging standard "Beautiful Friendship is a good choice to conclude the CD, displaying the group's subtle ensemble voice, each member doing his thing while contributing to a beautiful whole.

Get Out of Town; Crazy He Calls Me; Jeepers Creepers; The Last Embrace; Momentum; I Loves You Porgy; Stealth; Peaceful; Beautiful Friendship.