By DAN MCCLENAGHAN
August 27, 2013
Sign in to view read count 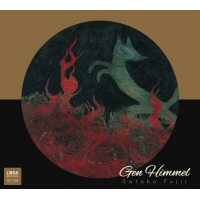 Satoko Fujii's notoriety is based on her originality, energy, and an unmatchable sense of fearlessness and adventure in the creation of music. As a leader of numerous ensembles—duos, trios, quartets, and big bands—she is a gregarious and generous spirit. Her music ebbs and flows, a moment of captivating serenity followed by a burst of a clamorous, sometimes riotous action. A gentile and pretty interlude followed by a flailing riot, with each band member giving as good as he or she gets.

But when Fujii goes solo—and it's not often happened in her near- 20-year career, on Sketches (NatSat, 2004) and Indication (Libra, 1997)—she reveals a more introspective side.

Gen Himmel, conceived by Fujii to honor a number of her friends who had passed away over the past few years, finds the pianist in the solo setting once again, where she is at her most gorgeously lyrical. It is music that is by turns stately, reverent, happy, spacious and majestic. Her early classical training comes to the fore in cerebral segments, and there are moments of melancholy and reserve. Space is a factor, as is deliberation. There are intensely focused forays into idiosyncratic complexities that only Fujii could conjure, in this very personal journey.

The 2:30 title tune ("Gen Himmel" is German for "Toward Heaven") opens with a brief intro that sounds like subtle electronics, but is actually Fujii's use of metal-headed percussion sticks to coax subtle sounds from the piano strings—a technique she uses often, and one that draws the ear. Its spare and deliberate chords, like a church house sendoff, usher the listener off on the journey toward peaceful eternity.

Fujii employs dark tones on "In the Dusk." The same can be said for "Hesitation," while on "Take Right," Fujii again employs piano preparations, altering the instrument's timbre by placing objects on the strings. Fujii is masterful at this technique, which gives her artistry a mysterious, unearthly quality.

Fujii, in her ensemble work, can be described as a musical daredevil. Fujii solo, as on Gen Himmel, is pure, finely focused beauty, from beginning to end.