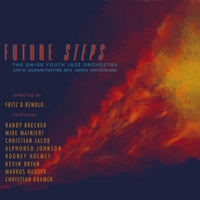 This engaging in-concert album by the Swiss Youth Jazz Orchestra and an array of renowned guest artists is properly described in an accompanying press release as "Bandstand Learning with Role Models," as indeed it is. The SYJO is literally surrounded by them (role models, that is), with the more seasoned players handling the bulk of the solos in a program that consists for the most part of music by the orchestra's director, Fritz K. Renold, composed in the style of the groundbreaking fusion band, Steps Ahead (one of whose founders, vibraphonist Mike Mainieri, is among the guests and wrote the closing number, "Beirut").

That's not to imply that the outsiders steal the show, as the SYJO, benefiting from a week of rehearsals leading to the concert at the Jazzaar Festival in Aarau, performs exceedingly well in its role as caretaker-in-residence, imparting a penchant for and understanding of the music well beyond its collective years. In other words, fusion has seldom sounded better than this. Renold deserves a large share of the credit, as his songs evince a rhythmic and harmonic pattern that is staunchly progressive yet invariably pleasing to the ears. While the spirit of Steps Ahead is ever-present, Renold has used that spirit as a starting point from which to create a smorgasbord of superlative big-band jazz.

The "role models" do their share as well, as soloists and as indispensable members of the orchestra. Kevin Bryan, for example, leads the stalwart trumpet section, and one couldn't ask for a more able rhythm section than one comprised of Mainieri, pianist Christian Jacob, bassist Alphonso Johnson and drummer Rodney Holmes (outstanding on Renold's "A New Kind"). Mainieri solos on half a dozen numbers (including "Beirut"), Jacob and trumpeter Randy Brecker on five apiece. Another guest, Markus Hauser, shines on tenor ("Future Steps," "Papa Rolf") and soprano ("Benjamin Sujesh"). Soloists from the SYJO are trumpeter Silvan Schmid ("Future Steps"), guitarist Claude Stucki ("Alkapuri"), alto Chris Sommer ("I Got Ilse") and tenor Christoph Huber (the exquisite "Mandela"). Felix Piringer, on ewi, recreates Michael Brecker's original solo on "Beirut," which embodies a more "fusion-like" vibe than anything else on the album.