Home » Jazz Articles » The Cosmosamatics: Free Within The Law 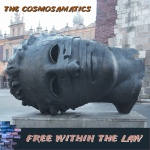 This group has fortunately been documented quite a few times on record, and consequently this disc offers insight into an ongoing affair. The front line of woodwind multi-instrumentalists Sonny Simmons and Michael Marcus has now not only established the kind of rapport Simmons used to have with Prince Lasha forty odd years ago, but also moved beyond it, which is just as it should be.

This is abundantly obvious from the off. The opening title track finds the two men jousting like there's no tomorrow, with lines spinning off into the ether at a high rate. Their efforts are given ample substance by the bass and drums of Peter Herbert and Art Lewis respectively, a duo alert to every rhythmic nuance and capable of imparting enough drive to move mountains.

The sly funk of Simmons's "Afro Funk" proves there's more to this group than all out blowing. The composer's English horn is an instrument he's made his own in this area of the music and its keening edge provides a nice contrast with Marcus's John Carter-influenced Bb clarinet. Again the two men converse over the rhythmic backdrop for a while before Simmons solos and the overall effect is happily that of four men in thrall to the greater idea that the music inevitably is.

The same funk applies to Marcus's "May-Lee-High-Young." Down home in terms of rhythmic contours, Simmons puts in some of his most effective work on this one, showing how much he's absorbed the Ornette Coleman strand and refined it to the point where his is the voice that emerges at the expense of all others. Marcus's tenor sax here is garrulous without being overbearing, not least because he too has long since arrived at the point of personal expression, which is just as it should be.

In such company, Marcus's "Morning Daffodil" has an elegiac air about it, which fulfills the promise of the title. Lewis employs brushes in a manner which brings out the innate beauty of the reeds mens' lines and Marcus shows, in no uncertain terms, how his appreciation of the tradition goes back decades. Again the balance between form preconceived and form spontaneous is finely struck and the results are compelling.