Anyone in whose music collection resides a solo bass record owes a debt of gratitude to Francois Rabbath. For without his pioneering work as a recording artist, conceptualist and teacher, the bass would be far less often found as a compelling lead instrument.

Rabbath, a resident of France since the '60s, has a story with typical European charm. Born in Syria, he began experimenting on an elder brother's bass at age 13 and taught himself to play, with the vague help of a copy of Edouard Nanny's Contrabass Method. Since he neither read music nor French, it can be posited that much of Rabbath's style and innovation are his own. This determination would soon prove its worth.

In speaking with Rabbath, he explained how teaching himself would later facilitate teaching others. "When I was working the Edouard Nanny method, for me some passages or methods were very illogical," he said. "And because I was alone and no one said to me don't do this, it's not correct, don't do that, it's not correct, I do all the wrong things. And I found out that the wrong things were the best. And little by little I begin to write my own method." That method is proudly displayed on Rabbath's debut from the early '60s, originally titled The Sound of the Bass but better known to American listeners as Bass Ball. On this Philips recording, Rabbath is accompanied solely by drums on a program of twelve beautiful originals. When asked why he chose what at that time was an unheard-of format, Rabbath replied, "I was trying to prove that two instruments, bass and drums, can make something by themselves, because always the bass was accompanied by the orchestra when it made solos, always a few little bars of solo, improvisation, and I decide to do all the record without piano, without harmony, nothing."

The format also began Rabbath's career as a composer, a term he accepts despite his protests that he never studied the art formally. Bass Ball's music stemmed from the simple lack of repertoire for the instrument, a situation that Rabbath, his American contemporary Bertram Turetzky and all of their stylistic heirs have remedied in the intervening decades. "I was composer by instinct," Rabbath stated. "I am a composer because I was frustrated there was no repertoire for the bass and I say we all must do something." 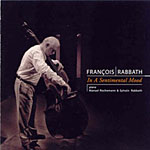 After the success of Bass Ball, more albums followed, several in the same bass-and-drum setup and others demonstrating an increasing range on Rabbath's part, including Sazmorphosis, a disc that finds him overdubbed on the saz, an Eastern stringed instrument, and In A Sentimental Mood, his bass leading a traditional piano trio on a program of jazz standards. "The bass is the only instrument that can do everything," Rabbath declared. "It can do the melody, it can do the accompaniment, it can be in the big orchestra, it can be soloist in jazz orchestra, everything—all the bass players must play all kinds of music to understand how it can be done and the richness, like if you speak many different languages."

Rabbath has certainly exhibited complete mastery of every genre and his technical abilities have made him a sought-after instructor both in person and through his monumental four-volume Nouvelle Technique De La Contrebasse. A new way to learn from Rabbath, taking advantage of modern technology, has just been released: the DVD Art of the Bow. Rabbath explained how one of his pupils, Hans Sturm of Indiana University, was on a plane watching biomechanical computer models of golf swings and thought they could be applied to analyzing Rabbath's techniques. Somewhat morbidly, Rabbath explained the need to do the instructional video: "Before I die I must give my arm to someone—the comprehension of the movement even I discover, because sometimes they ask how you do that and I don't know, and when I see myself playing with the biomechanic [imager] I am starting to understand so it helps a lot."

Students and other interested parties will have a rare opportunity to absorb some of Rabbath's wizardry first-hand this month at a workshop given at David Gage String Instruments. He hopes that his career will continue to inspire other bassists to feel confident as lead instruments. "I can say I contributed to open this door and I am very happy that many bass players do this now and they are doing it very beautifully also; It's like I can say they are my children."