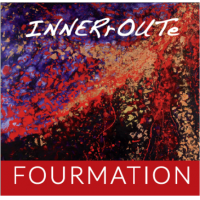 INNERrOUTe is the clever name of this New York-based foursome. It's a band on a mission to, as the back cover says, remain "deeply rooted in jazz, while creating genre-bending journeys in free improv, touching rarely experienced & emotionally beautiful realms." In similar fashion, "First Prayer" once again begins with Tranchina setting a template, a pattern upon which the other members join in, Savage's trumpet enhancing what might be considered one of those "emotionally beautiful realms," a slightly reverb-laden softness hinting that this "free improv" might not be of the kind that smacks you upside the head. In fact, as the band moves onto "The Roadless Traveled," one might get the impression that Fourmation is heading down a path somewhere between Miles Davis, circa 1969, In A Silent Way and the vast expanses that music made possible. Since we're using labels here, one might call Fourmation a kind of free-form easy-listening experience, the lines not always uniform, the absence of "songs" in the usual sense pervasive, the reliance on a pensive feeling and nuance paramount. This could also be said of their 2011 eponymous debut.

By the time we reach "Morpheus Awakens," Tranchina has moved beyond his more functional role creating patterns, delving into headier territory, a la Herbie Hancock's Mwandishi and Head Hunters periods of the early-to-late 1970s, his electric piano tossing off glimpses of what is in other settings a more lyrical, acoustic style of traditional jazz, albeit maintaining Fourmation's funkiness. The aptly titled "Slippery Slope" clocks in as the album's longest cut, at just over 13 minutes. And, as with all 12 of these original group-composed pieces, it offers perhaps the best window into each member's talents as musicians, McCrossen (who also doubles on electric fretless bass) distinctively plying and plucking his resonant bass while D'Agostino's flowing drum rolls and fills suggest a big band drummer in a former life. Eventually, Savage shows up as the band as a whole creates a rolling rock groove with Tranchina back to supplying steady formal lines, the trumpeter still somewhat soft-focused but occasionally letting a blast surface here and there. Despite the way in which Savage's horn (he doubles on flugelhorn elsewhere) is recorded, his voice does manage to provide the necessary bite to an album that otherwise seems to put a premium on relaxed, open-ended vibes. "Sacred Eclipse" comes closest to recalling In A Silent Way's stolling rubato, the easy listening peppered with more soft-focus, minimalistic, non-thematic music that, with Savage's playing especially, invokes a hymnal-type crossing between jazz and something akin to something "sacred." It's a sketch, an idea, as is much of Fourmation.

To say that Fourmation soothes would not be far off. The rest of the album extends the variation on a theme commented here, with subtle dissonances and more loose-limbed playing that rests easy on the ears, the moods mostly temperate, mellow. And while, on the surface, the music may play like an afterthought, easy to hear, and therefore easy to perform, Fourmation's mellowness hints, suggests and allows the listener to fill in the blanks even as they're hearing music created by four accomplished musicians, all of whom have a shared history. With no apparent agenda other than to experiment and explore, it's music that reflects some deep, patient four-way listening.