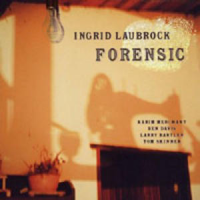 Darkly beautiful and breathtakingly inventive, Ingrid Laubrock's third own-name album is one of the very best to come out of the UK in recent months, and also the one which heralds the arrival of the London-based saxophonist as a major player on the international jazz stage.

Mysterious, moody and close to the edge, Forensic plays like a new take on the noir tradition. It's astringent and shadowy, like you'd expect from noir, but it's also visceral, hot and exhilarating, like you probably wouldn't. A new noir for a new world disorder.

The vibe starts with the cover art—a series of "crime scene" type photographs ranging from the enigmatic and vaguely menacing (a burnt-out basement) to the overtly symbolic (the shadow of a sewing machine), plus a remarkable shot showing fire and light exploding wild aura-like around Laubrock's head—and continues through her performances and those of her outstanding band of young London lions.

A chorister and pianist in her native Germany, Laubrock took up saxophone on relocating to London as a teenager in '89, studying for a year with Jean Toussaint. Now an assured stylist on soprano, alto, tenor and baritone, her approach—poised and audacious, harmonically advanced, texturally rich and relishing individual and collective risk-taking—carries traces of such diverse players as Coltrane, Konitz and David S. Ware. But it is ultimately entirely her own, both in the tradition and at times riotously out of it. Likewise with her band. Karim Merchant's piano straddles everything from Jelly Roll to the present and recalibrates much of it (on the title track, for instance, he dissects first Monk and then the stride style which informed him). Ben Davis is an awesome, unprecedented delight on cello. Larry Bartley and Tom Skinner are imaginatively muscular, playing inside, outside and around the beat but always driving things forward.

Forensic is released on the righteous but fledgling, musician-run label F-IRE, which despite punching well above its weight—other ranking bands who make up its governing collective include Acoustic Ladyland and Jade Fox—is still without proper UK, let alone international, distribution. As a result the album has got kind of lost under the winter avalanche of major label releases and has yet to penetrate much beyond the sharp end of the UK jazz scene.

But great art will always make itself heard, and the buzz around Laubrock and Forensic is certain to grow.

Visit Ingrid Laubrock on the web.