By HRAYR ATTARIAN
February 13, 2017
Sign in to view read count 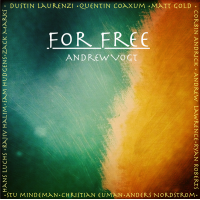 Bassist Andrew Vogt's engaging EP, the entirely improvised For Free, serves as a teaser for two of his upcoming 2017 recordings. The tracks on For Free are from the same sessions that resulted in the above mentioned The AV Club and Awakening, but they are not included on either of them.

The spontaneously created music is not, like many other collective blowing sessions, filled with unbridled energy and dissonance. It is indeed quite accessible with overlapping hypnotic refrains that logically create captivating moods and ambiences.

On the tender and poetic "Ballerina's Footsteps" saxophonist Dustin Laurenzi and trumpeter Quentin Coaxum echo one another leading to a mystical atmosphere. The simmering rhythm section, with guitarist Hans Luchs joining Vogt, Mindeman and Euman, adds a dramatic edge. Laurenzi's tenor emotes with melancholic elegance over the sextet's percolating vamps.

Not all the tunes are introspective, indeed some bristle with an electrifying passion. "The Storm" for instance features saxophonist Rajiv Halim letting loose brassy tones and honking notes over Euman's thundering beats. Mindeman contributes sparse, resonant chimes with his percussive pianism. Meanwhile Vogt and guitarist Matt Gold perform the melody with a soulful swagger.

Although For Free does whet the appetite for Vogt's two upcoming records it is more than a mere sampler or preview. The seamless synergy and the stimulating dynamics of the groups as well as the superb musicianship and artistry of all involved make it a superlative and stand-alone work that makes for a rewarding listen in its own right