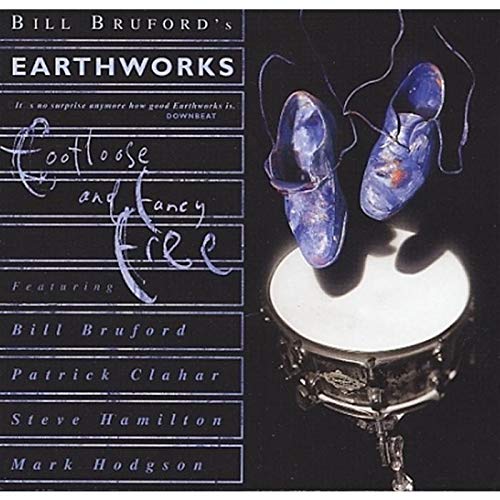 Drummer Bill Bruford?s enviable legacy surges into the new millennium with a refreshing twist! On the basis of this recently released 2-CD set, his all acoustic jazz quartet ?Earthworks,? should be considered among the new generation of jazz based combos that are making a difference! The band offers a novel and rather sizeable glimpse into the near term future with this outstanding effort featuring takes culled from its debut album and more. And while we won?t imply that ?Earthworks,? took eight recordings to hit its stride we may suggest that the band has attained the pinnacle of excellence here.

Saxophonist Patrick Clahar?s radiantly expressive and lyrically rich articulations provide the often whispery or airy characteristics throughout these fourteen works. Whereas Bruford?s signature style rock based methodologies have seamlessly transformed into a jazzy approach, awash with in-the-pocket grooves and his customary razor sharp precision. These performances at London?s ?Pizza Express? venue highlight the musicians? often dazzling inventiveness! With this outing, they meld tricky progressive rock type unison maneuvers - albeit with a bit of subdued flash, along with swing grooves and the soloists? harmonious exchanges. On ?Come to Dust,? pianist Steve Hamilton opens with lushly romantic chord voicings followed by Clahar?s resonant sax work. In addition, Bruford establishes the tempo via massive tom rolls and cymbal swashes, as the band segues into a ten-minute ballad that highlights its melodic side. But they kick up a storm during many of these works while displaying a keen predilection for churning out tuneful themes. The drummer peppers and pushes his associates with subtle accents while also executing sweeping press rolls and hammering out crisp backbeats on his ringing snare drum. Either way, Footloose and Fancy Free indicates a significant milestone for this superb outfit. Strongly recommended!

CD1: Footloose and Fancy Free; If Summer Had Its Ghosts; A Part, and Yet Apart; Triplicity; Come to Dust; No Truce with the Furies; The Wooden Man Sings, and the Stone Woman Dances. CD2: Revel Without a Pause; Never the Same Way Once; Original Sin; Cloud Cuckoo Land; Dewey-Eyed, then Dancing; The Emperor’s New Clothes; Bridge of Inhibition.