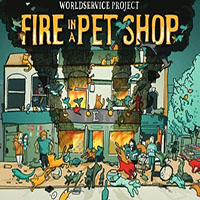 With its debut album, Relentless (Brooke Records, 2011) WorldService Project announced itself as a band to watch. Since that release, the five-piece—led by keyboardist and principal composer Dave Morecroft—has consolidated its reputation as a cooking live band, in particular in its Match & Fuse live collaborations with like-minded bands from across Europe.

Now, its second album, Fire in a Pet Shop, is radically different to Relentless; different enough that fans of the earlier record may wish to sample the follow-up before embracing it. This time out, WorldService Project seems to have opted to play it for laughs, as is suggested by the quirky album title itself (a phrase used as a disparaging description of certain types of improvised music) and the track name "Change the F**king Record"—both of which the group must surely hope will not come back to haunt it. In addition, the album's cartoon cover and in-jokey musician credits like "Morecroft: clown," contribute to the impression that WSP may have been overdosing on old Frank Zappa records.

Musically, the band does not play it straight either, sometimes betraying the occasional Zappa-esque trait. Fortunately, despite resorting to a prolonged passage of menagerie sounds (check those musician credits for details...) the album's title track avoids the suggested cacophony by deftly walking a tightrope between the tight riffs and solos which characterized the earlier recording, and a looser ensemble approach that radiates infectious energy.

Fundamentally, WorldService Project consists of five extremely competent instrumentalists who work well together so that, even when they are aiming for looseness, there is never any fear that things will come unraveled. When all five are playing flat-out at the same time, they pack an impressive punch and fill up the soundscape. Because their playing together has been developed and tested in front of live audiences, it has a reassuring tightness—even at its most ramshackle.

As before, the band draws from an eclectic range of sources and—ironically or not—freely integrates them into its music. At times WSP can sound more like a prog-rock band than a jazz ensemble, particularly when it reveals its penchant for bombastic riffs with broken rhythms, as on the opening "De-Frienders" or "Change the F**king Record." The eclecticism finally bears fruit and is justified in the album's longest track, the nine-minute "Cunha," which begins in restrained fashion before gradually gaining momentum and building to a storming climax that concludes the album. As with much here, it reemphasizes that WorldService Project has the capability to produce a five-star album... even if it doesn't quite make it this time around. Maybe next time?