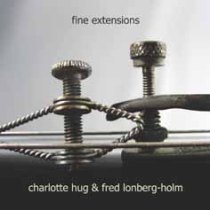 Viola and cello have coexisted in splendid harmony on the concert stage for hundreds of years, both instruments bolstering powerful orchestral settings for every composer, even before Haydn, Bach, Mozart and Beethoven employed violin and cello in compositions with vivid effect. What delights the inner ear, however, especially on the brazen Fine Extensions, is the fact that these instruments transcend all earlier sonic relationships between the strings. Locked in the embrace of a tonal adventure, jousting with one another, egging each other on with brave linearity, vertically and horizontally, to explore every aspect of the machinations of sound and its descriptive grammar as well, artful ingenuity abounds, amidst an epic journey that penetrates myriad layers of sound.

The great invention of this album's music is not so much technical innovation, or extending the sound palette of each of the instruments. Rather, violist/singer Charlotte Hug and cellist Fred Lonberg-Holm embrace the very anatomy of each instrument, including the sound palette that each is endowed with. Thus, there is an almost human relationship that rubs shoulders with an industrial one, encompassing sound design that prompts unfettered exploration. Hug drives the music in a forward motion, undulating and almost threatening to take it vertically. This is only a ploy; an invitation to Lonberg-Holm to slide in his attack, groaning from bottom to top. Once their voices entwine, there is an ocean of sound that results from Hug's myriad overtones, like frank notes played boldly, but with a soft bow. Then there is the suggestion that the music will be goaded by one or the other—pushed, twisted, swerving, yet hip to each push from cello or viola into a new sonic stratosphere.

It is sometimes impossible to separate the sensibilities of the two musicians, despite the fact they come from two opposing sound spectrums and collide to make a third. Each has developed a unique grammatical approach to the language of their instruments. Yet both Hug and Lonberg-Holm succeed in expanding the literature of improvised music, making this very thing possible because they refuse to be cowed down by conventional tonal spatulas. Thus the cello becomes the doppelganger of the viola, as it squeals delightfully, goading the viola to moan with terrible human pain, almost as if the anatomies of the two instruments were interchanged.

On this path-breaking album, Hug and Lonberg-Holm succeed in breathing new life into their instruments as they interrelate—not just as improvising musicians, but simply as two classic instruments, launching into a relationship where one rises to complete the life of the other, and vice versa.