By Doug Collette
September 7, 2019
Sign in to view read count 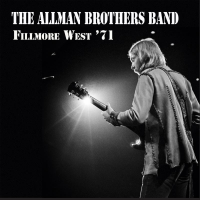 Like virtually all the previously-releases from The Allman Brothers Band Recording Co., this latest archive release, Fillmore West '71, is a mixed blessing. The four-CD set might better have been graced with the stylized graphics that adorn such titles as Nassau Coliseum: Uniondale, NY 5/1/73 (The Allman Brothers Band Recording Co., 2005) including the caveat about sound quality, because it is of a piece with such exhumations from the ABB vault, even if deceptively so: the best moments hearken to the brilliance of the seminal At Fillmore East (Capricorn, 1971), but the musicianship on fully half the collection is muffled by production that, like the packaging, belies the rigor of the the Southern rock pioneers in the original six-man lineup documented here.

The most memorable intervals reside within the compact discs dated 1/30 and 1/31 respectively. On the latter, a near-eleven minute "Dreams" is a deeply psychedelic exploration of a tune that did not appear anywhere on The 1971 Fillmore East Recordings (UME, 2014). Otherwise, every number on that collection is here, sometimes in a form that even (almost?) transcends those included on the aforementioned groundbreaking concert piece: on the "Whipping Post," close to twenty-one minutes in duration, for example, the band extrapolates that combination of savagery and solace at the core of Gregg Allman's composition. Bassist Berry Oakley is especially prominent on a reading of that song from the night of 1/29, asserting himself, as he often did, almost on par with the extraordinary guitarists.

It is one of a small handful of moments fully capturing pinnacles of the increasingly well-honed interactions among this ensemble that just about offsets the liabilities of Fillmore West '71. Take the aggressive call-and-response guitar partners Duane Allman and Dickey Betts engage in on the "In Memory of Elizabeth Reed;" ostensibly from the first night of this run, one of the most egregious instances of erratic audio quality on this first disc; near-dropouts occur at more than a couple junctures, perhaps due to clumsy edits or tape changes, disrupting the flow of such passages, undermining Gregg Allman's role as blues singer par excellence, via vocals on truncated cuts like "Trouble No More" and the impassioned "Stormy Monday," where the Hammond B3 of the band's chief songwriter and keyboardist is way too far up front in the early going.

Likewise, the sound is egregiously trebly, to the great detriment of dual percussionists Jaimoe and Butch Trucks, during the forty-five minute "Mountain Jam" included as 'bonus' material on disc four. Recorded at The Warehouse in New Orleans, just after those famous Fillmore East appearances, this piece is nevertheless notable for the "Who Do You Love" interval near the end, proof positive of how open-ended was the Brothers' approach to the melodic theme of British folk-rocker Donovan's quasi-children's song "There Is A Mountain."

Clearly still in the process of development as a performance piece, as depicted on Bear's Sonic Journals: Fillmore East February 1970—Deluxe Edition (The Allman Brothers Band Recording Company, 2019), the two-CD 'Deluxe Edition' of ABB's second studio effort Idlewild South (UME, 2015) as well as Live at the Atlanta International Pop Festival: July 3 & 5, 1970 (Legacy, 2003)—all three of which are superior to this package in design and production—its appearance on Fillmore West '71 only reaffirms the debilitating sonics of this package. Curiously, there is no specific credit for mixing, and while mastering engineer Tom Lewis no doubt did his best with what he had to work with—reel-to-reel soundboard masters, not multi-tracks—the final product for this release begs the question of prior preparation of these tapes.

Unofficial information for releases of this content that were eventually forestalled also correlates to the conflicting details of the dates assigned to this package. Various documents accessible on-line (conspicuously including the database on the Allman Brothers' own website), suggest calendar contradictions (three nights or four?) that essayist John Lynskey glosses over in an essay that otherwise might well have been abbreviated to allow for more action shots of the ABB. But photographs are relegated to an otherwise formidable black and white front cover image of Duane Allman, oddly to the exclusion of his bandmates, who only appear on the back in a stage shot.

Likewise from the camera of Jim Marshall, this action image looks all too similar to yet another piece of work from his famed photographer—from the gate-fold of At Fillmore East—but it dovetails with more appealing visual accouterments—in the mushroom graphics on the compact discs themselves and the replications of the show posters inside this six-panel digi-pak. Representative of the peak musical moments on the CD's (there is no vinyl at this point), these splashes of color are in marked contrast to the one-dimensional monaural timbre of the tapes that might otherwise have warranted a lesser-priced selling point that would belie such stylish artwork.

As a result, while Fillmore West '71 does not tarnish the reputation of the Allman Brothers Band, neither does it add much of anything significant to the legacy of the group. As such, it is sorely wanting as due recognition of the group's fiftieth anniversary, ostensibly, the fundamental reason for its conception (if not its execution). Consequently, for both the devout fans of the group as well as curious novices, this release should best function as (one of many) means to the end of the primary source of the Allmans' reputation, those epochal Big Apple performances preserved for posterity that took place roughly six weeks after these, at the east coast counterpart of this hallowed hall.