Taupe: Fill Up Your Lungs and Bellow 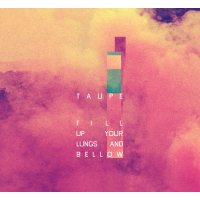 Taupe's creative universe thrives post-bang. It understands that stars, planets, and galaxies are an ultimate goal, yet understands the value of its gaseous beginnings before proceeding to grander narratives. Indeed, meta-explanations need not apply in this formation process, as they would only get in the way of the extroversions at play throughout. As torch-bearers of this philosophy, guitarist Mike Parr-Burman, altoist Jamie Stockbridge, and drummer Adam Stapleford have between them carved out an infinitesimal slice of darkness somewhere in the farthest reaches of our expectations and filled it with unabashed sound.

Case in point is this album's opener, "A Clown Drools," which from a staccato attack unspools a chain of chemical reactions. Its series of elliptical orbits and dust-laden connective tissue doesn't so much set a tone as break it into holographic pieces. As also in the follow-up track, "Don't Look Down," moods cycle between synergistic bursts and expositional grooves. Parr-Burman and Stapleford are a tightly wound spring stretching across lightyears of distance to encompass Stockbridge's spontaneous combustions. No matter where this trio's arrows point, however, you can be sure they're heading in the same direction.

"More is More" plies the gentlest trade of this expedition. Even the gorgeously vigorous ending only serves to emphasize its delicate procedures. Next, "Take One" delights with its picturesque mashup of art rock, reverberant guitar, and free jazz. The sum, of course, greater than such fleeting associations would imply. Stockbridge is especially engaging, keeping every utterance immediate even as the distance beckons. The result of this enmeshment is nothing less than the album's masterstroke.

"Average Colour of a French Mole" is a tour de force of forces. It reveals the band's heartfelt patience, a willingness to let the music grow wherever the nearest sun may lure it. This track, perhaps more than any other, embodies the spirit of the album's title: Fill Up Your Lungs and Bellow. Not only in the obvious realm of Stockbridge's reed work, but also in the pregnant exhalations of the band, for whom collectivity is not an ideal but a norm by which life takes shape. That said, we may single out Stapleford's muscular developments and Parr-Burman's heat distortions for their profundity. In the wake of these fissions and fusions, there's only the gentle currents of "Plaques" to show for our having ever set foot where there is no surface. But don't let all this extraterrestrial imagery of mine fool you, for here's an album that was born and bred underground. All it requires is the rocket of your imagination to transcend the sheltering sky.

Track Listing: A Clown Drools; Don't Look Down; More is More; Take One; Average Colour of a French Mole; Plaques.