Various Artists: Festival in the Desert 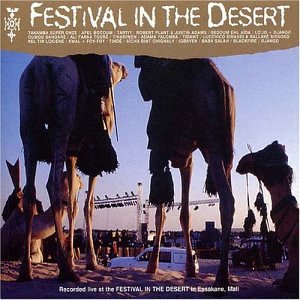 The Sahara is not generally known as much more than a massive stretch of hot, dry sand where camels are a primary form of transportation and water is your best friend. However, this year's Festival in the Desert brought a fertile collection of musicians to Essakane, an oasis 65 kilometers northwest of Timbuktu in Mali.

The remoteness of the location was just as much a test as the technical conditions, but more than a handful of artists made it all the way: from veterans like Mali's ambassador of the blues, Ali Farka Touré, to younger players like Adama Yalomba. While most of the 36 musicians hailed from Mali, other segments of the international delegation found their home in Africa, Europe and the United States.

This collection serves as a sprightly document of the 2003 event: twenty short (mostly 3-4 minute) tracks culled from three days of performances. Like any compendium with this many different musicians (and styles), there are bound to be selections which work better than others, and certain songs that appeal more to some tastes than others. That's a good thing. Diversity is important.

Ali Farka Touré overcame a broken-down Land Cruiser to bring his particular brand of folk guitar blues to the proceedings. His protegé Afel Bocoum (also from Niafunké, just down the Niger River) takes a looser tack, combining an emphatic repetitive groove with vocals that sail on and off the beat and guitar lines that snake around through nooks and crannies.

No tune manifests deep trance stronger than the track by Tartit, a group of woman Kel Tamashek singers who ride atop minimalist drum accompaniment with non-stop cyclical chants and throaty counterpoint. It's an intense launch into outer spiritual space. Be prepared.

Other artists combine traditions: Italian pianist Ludovico Einaudi joins forces with Malian kora player Ballaké Sissoko for a pared-down merging of folk with improvised pentatonic melodies, nibbling further into Western harmonies than anywhere else in this collection. Vincent "Kwal" Loiseau raps pointedly in French over guitar accompaniment, a surreal modern-meets-ancient combination that works. Young guitarist Baba Salah goes funky with a booty-shaking groove, but in this context his improvisation seems a bit cliché. Navajo alternative rockers Blackfire soil the affair a bit with derivative pop, and Malian singer Django takes it home with a torch ballad.

Of course nothing endeared this festival more to the press than the presence of superstar Robert Plant—and despite what you might suspect, he comes through in stellar style, combining a sensitive touch with Justin Adams' revelatory guitar accompaniment. If his star power brings this event to the world stage, it's just as well. This record is a stunning display of international culture that's all about shared ground, whether sand or soil.