By FRANCESCO MARTINELLI
July 21, 2007
Sign in to view read count 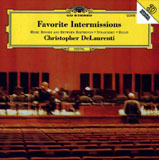 One of the most exhilarating moments in On The Edge, the 1992 documentary about improvisation directed by Jeremy Marre from Derek Bailey's book, is a discussion of the classical music situation by the late English guitarist, his famous kitchen in the background: "The modern symphonic orchestra seems incapable of inventing anything. Its function seems to be mechanical, or at best, uhm, Pavlovian... the moment they get most close to invention is when they're tuning up.

Bailey voiced the feelings of many concert goers, for whom the sonic excitement seemed to diminish after the warming up and that great swelling unison of tuning, during which everybody is apparently allowed to make his contribution heard, in a reversal of the usual hierarchy. I too shared this impression since childhood: the promises of the warming up were never fully realized by the performance. Now Christopher DeLaurenti has put everything on record—not the performances of famous symphony orchestras, but their warming up and tuning, sometimes protracted, until the conductor makes his appearance. Greeted with a change of attitude by an audience that doesn't seem to care for the previous sounds but thunderously applauds the chief, the fun seems to be over after the conductor arrives, much like a class-master.

DeLaurenti wasn't authorized to make these recordings, and considering the current debate about copyright, it is interesting to discuss their status: who owns the rights, the composer of the original work, the absent conductor, the incorporated orchestra, or the single musicians? And should they, or some of them, actually hold the rights to "performances that weren't there until DeLaurenti spotted them, even if none of the "right owners can demonstrate their ownership, or even recognize the work?

A "conceptual work that's actually great fun to listen to, inspired by Cage and Bailey and made possible by modern technologies, this CD is a must-listen for anybody who's reflecting about creativity and social function in music.