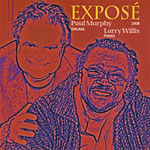 Honesty in music is without doubt identifiable. It comes across in the way musicians touch their instruments, the statements they make, the tone they set, the nature of their musicality and how they all merge. No truer an example of this can be found than the 2008 duo Exposé from drummer Paul Murphy and pianist Larry Willis.

An improvisation this clean can only arise through expertise, confidence and vision. Murphy and Willis do not intend to throw the listener out of the park, rather have come together to deliver a message that glistens.

Sharp, light, direct chords from Willis’s hands jibing with Murphy’s rumbling on the toms and cymbals starts the seemingly endless journey, exploring the essence of how they move through their instruments. The ease with which they construct more than take apart lends nothing but forward motion to the music (“Titanium”). On the whole, the ride through this recording is headstrong, without deviation and is breathtakingly lyrical in several captivating instances (“Liquid Dance,” “Introspectus,” “Deeply Embraced”). The music is irrevocably consistent, melodically large and often comes across as being played by a quartet rather than by a duo.

The largeness conveyed by the piano has to do with the constant juxtaposition of bass to treble, chords to trills within a steady tempo. Even when the tempo slows and the tunefulness does not require as many notes to be expressed, Willis attacks the keys from his soulful center (“Exposé,” “Deeply Embraced”). No fooling around; Willis is out there, undaunted and sure of his ability to change notes and draw musical pictures that have no association with disguise, that are precious and freely spoken, sometimes solidly synchronous and seldom divisive, one hand to other.

Murphy effortlessly adjusts the coloration of his drumming to match the literacy of Willis’ pianistic language. It is hard to believe that Murphy is actually moving through space as he moves from one part of the drum set to another because the action is seamless. Nowhere does Murphy hesitate to respond fully to Willis’s hands (“Exposé”). The rhythmic, abstractly percussive topography speaks for itself (“Liquid Dance,” “West Lens”), but would not be possible were it not for the two listening to each other in every song.

Murphy uses every tool he has on every drum surface; hands, brushes, mallets and sticks on snare, tom, cymbals, bass and bongos. The drumming possesses substantial physicality even in its subtleties, and often an incredibly rapid and feather-light touch. The sound is rarely reverberant, but, more significantly, tight, precise and driven as exemplified brilliantly in the drum solo, “Labyrinth.” The drums and piano inspire each other: whatever springs forth from either instrument, it is met with more than appreciative and developmental procedure, one cascading sonic element after another (“Night Shapes”).

A complete and fulfilling sound burns through every moment of musical time when Willis and Murphy interact instrumentally. One sure-fired stroke after another.