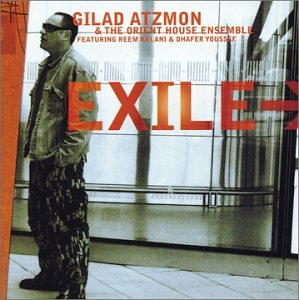 There are so many contradictions about protest albums. Whatever the subject, they usually exude as much joy as anger; as much implication as direction; and as much journey as arrival. That's more an aesthetic issue than a moral or intellectual one, but it can't help but broaden the experience beyond direct communication. In jazz, discovery is the locomotive, no matter what's on the train behind it.

Just as well. Gilad Atzmon's Exile holds true to its title, a bold statement on both the injustice of the Palestinian situation and the Israeli leader's own expatriate status. Atzmon very clearly enunciates his view that Israeli history and policy has resulted in the forcible mass disenfranchisement of Palestinians (and ironically so, given the history of persecution of the Jewish people). His clever reinventions of Jewish and Israeli songs drive home the point in unexpected and effective ways. While the core of the music is instrumental and Atzmon's voice on the saxophone is dominant throughout, vocalists step up on four tracks for more verbal statements.

He retools Naomi Shermer's '67 Six Day War anthem "Jerusalem of Gold" into "Al-Quds," literally "the holy," the Arabic name for Jerusalem. In the introduction, the core quartet rides on pianist Frank Harrison's cascading ripples, Atzmon stepping up for a heavy Coltrane-ish minor key devotional. And then, in a rapid turn, the tune becomes more jaunty, swinging across ostinato bass octaves and regularly convening for an upbeat theme. An extended solo takes Atzmon out, bursting forth with repeated rising cries. The lyrics by Mahmoud Darwish offer the following thought (in translation), among others:

I can bear the stabbing of daggers more
Than the rule of a coward over me.

Knowing the background to the piece, hearing its sharp contrasts, and reconciling its intertwined messages is no simple matter. But then neither is the subject of Atzmon's protest.

And so the complexities intertwine. As does the music, which has its moments of introspection (eg. "Jenin," a soft lament), exuberant expansion ("Ouz," with intermittent unison shouts), and rollicking fun ("Orient House," an up-tempo romp). Atzmon's voice (mostly on saxophone) has a thick richness that often recalls Sonny Rollins or John Coltrane, though he can wax light and lyrical when need be. Members of his Orient House Ensemble, who don't particularly distinguish themselves as individuals due to a relative lack of space up front, do an effective job navigating these ever-changing and often turbulent waters.

As one might expect, these tunes embody Jewish and Middle Eastern traditional harmonies, themes, and rhythms. Their fusion with jazz seems effortless and intuitive, a credit to Atzmon's adept hand as composer. He certainly has no trouble with range. And true to the double spirit of this protest music, Exile closes with a gust of fresh air. By the time the sweet, swinging "Epilogue" blows through, it carries with it an Old World charm and warm sense of optimism. Atzmon's storm has passed, leaving peace and hope in its wake.

Interested readers may wish to check out Gilad Atzmon's curious new book, A Guide to the Perplexed, just out this April.