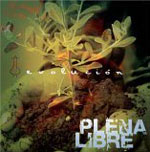 To most of the world, the music of Puerto Rico is synonymous with salsa, the peppy, jazzed-up Afro-Caribbean music that surfaced in New York in the late '60s and sparked an enduring popular dance movement all its own. But the island is home for several other varieties of folkloric and popular music as well. (Strictly speaking, "salsa" was always more a marketing term than any specific style, in all truth. Even today the genre is still pretty wide open, and plenty Cuban too.)

The twice Grammy-nominated Puerto Rican group Plena Libre has been kicking out records at a rate of about one a year since debuting in 1994 with Juntos y Revueltos. As the group's name suggests, it bases its music on the style known as plena, originally a rural Afro-Rican folk music but now popular everywhere. While the band has paid due respect to traditional aspects of the music—especially its rhythmic and vocal emphasis—it's also hybridized plena by introducing outside sources, creatively expanding instrumentation, and juxtaposing different vocal styles.

The aptly titled Evolución updates plena in a large-group context with several singers, four horns, piano, bass, and—of course—heaps of percussion in the form of timbales, congas, panderos, and more. The liner notes don't do much to help non-Spanish speakers understand the lyrics, but the overall mood is enthusiastically festive and upbeat. The peppery shuffle of "La Nota" matches vocal leads and chorus with horn interludes, bouncy piano rhythms, and bright, interlocking percussion. Likewise with the album's manifesto, "Mi Plena Es Libre" ("My Plena is Free"), which celebrates liberation in the catchiest way.

Three exceptions stand out on the album: the Latin jazz piece "Evolución," which gives the piano and drums (especially) much more freedom; "Yenyeré," based on the twistier bomba style; and the closing bonus track, a dance remix of "Tumbao," which is totally out of place (programmed beats??) but ought to bear some appeal to the young club-going set.

A wonderful album, chock-full of identity and optimism—and plenty effective to get hips and feet moving as well, should you feel the itch.