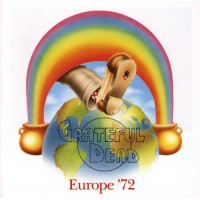 When asked the best introduction to the Grateful Dead for the uninitiated, I recommend Europe '72. That opinion has not changed in the intervening 40 years. This tour is one storied in the history of the band. It was the group's great bluesman, Ron "Pigpen" McKernan's last tour before he died of drink at the age of 27 in 1973. It sported the husband a wife teams of Keith and Donna Godchaux who brought a soulful presence to an already soulful band. It was the third double-or triple-LP live recording in the previous five releases, establishing the Dead as a preeminent live band. This original 3-LP release featured more new material than the previous live recordings. This is easily understood as the Dead's two most popular studio albums, Workingman's Dead (Warner Brothers, 1970) and American Beauty (Warner Brothers, 1970) preceded the '72 European tour.

The Grateful Dead have been a band that is greater than the sum of its parts. There has always been an organic synergy in their sound that goes beyond its roots in American country music and blues. Revisionist history might reason that the band is a collecting of good, not great, musicians, who, when they came together struck a magic alchemy able to result in "Dark Star" right beside "Death Don't Have No Mercy." The band embraced its jazz roots early by incorporating true improvisation into their performances. It should be no mystery that the band is a "Live" band and that their best work is performed in that setting.

The original 3-LP release of Europe '72 captures this, but in a more stream-lined manner than on Live/Dead (Warner Brothers, 1969). At the time, this was much more a function of the limitations of LPs regarding playing time than anything else. There was not a "Dark Star" or "Turn on Your Love Light" (at least initially on Europe '72. Rather, there was only the extended "Truckin'" (an anthem to be sure) and the staple "Morning Dew." But, that is what was available and the music and the lengths of performances were to set the standard for similar bands like The Allman Brothers Band throughout the 1970s.

So, "too much of a good thing" is not a problem on Europe '72. The listener was able to digest smaller bites of newer material performed freshly and relaxed, slowly acquiring a taste for the music. "Cumberland Blues" from Workingman's Dead captures a bluegrass hoedown groove mixed with some Jimmie Rodgers blues. "He's Gone," and new Robert Hunter/Garcia collaboration as of this recording, further plumbs the bottomless loam of traditional American Music. Then come the riches of the next 20 years in "Jack Straw," "China Cat Sunflower," "Sugar Magnolia," and "Tennessee Jed," all of which have made it into the jam band book. Garcia's taut and sinewy guitar beside Phil Lesh's fat bass somehow make what otherwise might be considered marginally talented vocals sound like high folk art.

Breaking to late in the 20th Century, newer audio formats essentially make playing time a moot point. With the advent of the CD and then the various digital flavors, a more comprehensive picture of the band and its performances could be offered. When once all there was was Live/Dead, a 2-LP set, we now have access to Fillmore West 1969: The Complete Recordings (Grateful Dead, 2005), an eleven-disc set containing the Live/Dead performances. The same fate has fallen to Europe '72. After the CD packaging of the original release, 2011 brought Europe '72: The Complete Recordings (Rhino), a mammoth 22 complete shows on 73 compact discs that that have since been offered separately by show. The music across this large set holds up well, standing as a monument to a band with many monuments.