By DOUG COLLETTE
February 24, 2007
Sign in to view read count 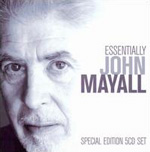 Essentially John Mayall, a five-CD box set, is not mere nostalgia. Rather, like most anthologies devoted to the Father of British Blues, it supplies a historically accurate focus on his career by setting his most recent work in relief against earlier recordings. In doing so it reaffirms his virtues as bandleader, composer, musician and talent scout.

Four of these CDs comprise Mayall's work of recent vintage for Eagle Records, which does full justice to the legacy of the Bluesbreakers moniker. Stories emphasizes the man's songwriting strengths and includes "Mists of Time, one of the most memorable tunes in his discography. Along for the Ride demonstrates what an inspirational musical figure he can be for others; he unifies such disparate high-profile musicians as ZZ Top's Billy Gibbons and the Space Cowboy himself, Steve Miller. At the same time, Mayall, true to his history of finding new talent, features the up-and-coming in the form of wunderkind Shannon Curfman.

The latter album is a sonically impeccable piece of work, rendering moot the issue of remastering (or lack thereof) of these other recently recorded CDs, including Padlock on the Blues (the original such technical work credited to Stephen Marcussen and George Marino no doubt sufficient). The inclusion of John Mayall's 70th Birthday Concert, which featured both Eric Clapton and Mick Taylor, is ultimately not the display of fireworks one might expect. The presence of the horn players will effectively remind the fan and the uninitiated of Mayall's jazz-blues fusion period (which has gone woefully overlooked as the archives have opened). In this context, it segues nicely into the collectible portion of Essentially, a full-length CD of live recordings described in the credits as taken "from John Mayall's archive or unreleased recordings.

This disc further illustrates the range and pedigree of John Mayall's recording career. Spanning 1966 through 1994, it juxtaposes seminal tracks with the early Bluesbreakers alongside the now-famous drummerless acoustic band of the late '60s; some latter-day concert cuts reaffirm the man's continued enthusiasm and passion.

The latter virtues are always in place even when John Mayall is not truly inspired. He excels in the deeply emotional realm of the blues, not in its self-conscious lore (or the forced topicality that has occasionally blemished recent releases). Arnie Goodman's liner notes in the accompanying booklet alternately overreach and fawn over their subject, but they are factually correct and help this collection makes its point: John Mayall is deservedly revered by musicians and musiclovers alike as one of the most unique figures in contemporary music.