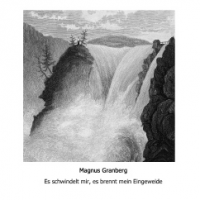 In recent years Magnus Granberg has become so prevalent that it is surprising to note his first CD did not come out until 2008, a limited-edition release with the ensemble Skogen. After a stuttering start, recordings came regularly after his first Another Timbre recording, Ist Gefallen in Den Schnee (2012), attracted glowing reviews. Now, Es schwindelt mir, es brennt mein Eingeweide is Granberg's seventh Another Timbre album in as many years. Across the previous six, he has employed ensembles ranging in size from five to twelve members, with various instrumentations. As he did on How Deep is the Ocean, How High is the Sky? (Another Timbre, 2015), for Es schwindelt mir, es brennt mein Eingeweide Granberg chose to employ baroque instruments such as baroque violin, viola de gamba and spinet alongside contemporary ones.

This time around, the music is played by a sextet that is a subset of the nonet on the 2015 disc. Tellingly, the music was recorded at a concert in Geneva in September 2017, after members of the previous nonet said it would be good to work together again, and (sextet members and frequent Granberg collaborators) Cyril Bondi and d’incise organised a week-long workshop for Granberg at Fondation l'Abri in Geneva.

Granberg contributed the new piece "Es schwindelt mir, es brennt mein Eingeweide" to be worked on during the residency. As so often with Granberg compositions, he based the new piece on an existing song. The title translates as "I feel giddy, my vitals are aflame," a quote from a Goethe poem that was set to music by Schubert. Granberg arrived at the Schubert piece via Frank Sinatra's poignant No One Cares album, particularly its track "None but the Lonely Heart" which was based on a Tchaikovsky song using the same Goethe poem.

At over sixty-two minutes long, Granberg's new composition dwarfs any of those source pieces. In typical Granberg fashion, the piece consists of seven sections in different modes, each including various melodic fragments, extended melodies, single sounds and chords that the musicians can choose from. The sections are not separated but lead from one to another seamlessly. The end result of any performance will depend on the many choices made by the individual musicians. The realisation here reveals the piece to be constantly evolving as musicians make individual choices based on hearing the results of others' choices. Despite the ever-changing nature of the music, the ensemble sounds coherent throughout, without any clunky non-sequiturs or jump cuts; that week-long workshop had obviously done a good job in preparing the players for the closing performance. As before, the combination of baroque instruments with electronics, percussion and Granberg's prepared piano works far better in reality than it might sound in theory.

Altogether, this album is unmistakably Granberg, displaying all of the individual touches that make his music distinctive and successful. It fits neatly into his already impressive discography. And there can be no higher praise than that.