Eric Clapton: Slowhand at 70-Live at the Royal Albert Hall

By DOUG COLLETTE
November 21, 2015
Sign in to view read count 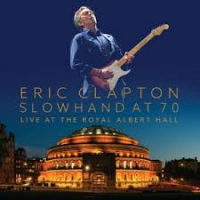 Over the course of the last decade, Eric Clapton hasn't made much spectacle of crucial turning points in his life and career( reunion with John Mayall or collaborations with Steve Winwood, J.J. Cale and Jeff Beck), he's just made them happen. In that light, his run of a week at London's Royal Albert Hall, during which he marked his 200th appearance at the famed venue, would appear to carry no more import than his turning 70 years old.

But the absence of any content, interview or otherwise, referencing this historical significance on Slowhand at 70: Live at Royal Albert Hall, becomes notable with the sole bonus inclusion of Robert Johnson's "Little Queen of Spades," a vigorous performance of which reaffirms the blues icon's resounding inspiration for Clapton more than "Crossroads," now so closely identified with the seminal power trio Cream.

Yet the performance with his current band, spanning the breadth of his career solo, as captured on DVD and CD in this package, reveals much about how Slowhand's career has evolved and does so in such purposeful fashion it becomes a virtual biography in song. In favor of significant choices such as "Hoochie Coochie Man" of Muddy Waters (with whom Clapton toured in the Eighties), the (overly) polished rock and its middle-of-the-road undercurrents such as "Wonderful Tonight" and "Pretending" become deemphasized within a set list that otherwise features a healthy selection of pure blues numbers, some of which, including the opener of J. J. Cale's "Somebody's Knockin' On My Door," are not as closely identified with Clapton as "Key to the Highway" or "Nobody Knows You When You're Down and Out."

The acoustic set may hearkens back to the famous Unplugged(Warner Bros., 1992), but in the form of "Driftin' Blues" as much as "Tears in Heaven," resonates with an understated personal stamp belying the careerism of the title and the period from which it's taken. Steady work with EC has informed the playing of veteran session-men and road warriors bassist Nathan East and drummer Steve Gadd with real swagger even as they remain as reliable as a rhythm foundation as the dual vocal presence of Michelle John and Sharon White, doesn't just bolster Clapton's limited albeit hearty vocal range, but adds delicacy and soul to songs such as "Tell the Truth."

The positioning of a quiet take of "Layla," in this song sequence indicates the crowd-pleasing home stretch of a show that concludes with "High Time We Went," (where appears EC accompanist guitarist and opening act Andy-Fairweather-Lowe), one of two selections from Joe Cocker's discography, along with "You Are So Beautiful," sung by organist (and former member of Ace and Squeeze) Paul Carrack who, along with pianist Chris Stainton, once the linchpin of the late British soulman's Grease Band, heightens the earthy quality of this music.

Clapton's grown markedly as a singer over the years, learning how to turn his lack of range into a strength yet his vocals can't match the elegance, simplicity and passion with which he solos. Yet in keeping with these economical arrangements-as well as his general avoidance of extensive improvisation, except, notably, teasing his way into Bob Marley's "I Shot the Sheriff" before he subsequently shreds with a vengeance-Clapton often humbly defers to Stainton and Carrack, in that order, before adding his own emotive touch to a performance: on this rendition of Blind Faith's "Can't Find My Way Home," introduced and sung by East, the original guitar hero gently applies filigreed decoration to enhance its intrinsically haunting nature.

The sumptuous, eye-pleasing graphic design of this three-disc digi-pak finds its corollary in the audio and video quality of the film, the impeccable nature of which compelled the debut of Slowhand at 70 in movie theaters the summer of 2015. The subdued lighting includes equally understated video projection and enhances the symmetry of the musicians' placement on the stage, itself reflective of how comfortable in his own skin has become their leader. Meanwhile, cameras panning from stage rear to high in the balcony, highlights this venue's regal nature and, in turn, mirrors the profundity of the occasion Live at Royal Albert Hall represents.

Casting aside a commercial standing that's otherwise beyond reproach, this title signifies the extent to which Eric Clapton's five-decades plus pursuit of his calling has paid off and ever-so-handsomely at that..