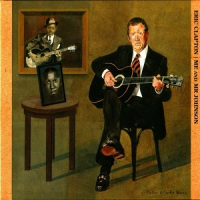 In the same way that Louis Armstrong was at center of the genesis of Jazz in the 1920s, so was Eric Clapton at the center of the British Blues invasion of the 1960s. Between 1965 and 1970, in turn, Clapton was a member of the Yardbirds, John Mayall's Bluesbreakers, Cream, Blind Faith, Delaney and Bonnie and Friends, and Derek and the Dominoes. And this was all before the release of his eponymous solo recording, when the guitarist was just 25 years old.

Over the next 34 years, Clapton has released approximately 25 recordings. The blues was in evidence on the vast majority of these releases, but never dominated any one of them. Only a single recording, 1994?s From the Cradle , was considered and promoted as an Eric Clapton "Blues" album (although this critic always considered 1975's E.C. Was Here a "Blues" album). From the Cradle showed Clapton in full bloom as a traditional blues artist, but this was not his definitive blues offering.

Today, Eric Clapton is 58 years old and he has finally released the recording he has been refining for his entire career. Me and Mr. Johnson is Eric Clapton?s fresh and authoritative performance of the Robert Johnson songbook. In classical music, it has been an unspoken conventional wisdom that cellists wait until well advanced in his/her career before recording the monumental Bach Cello Suites (BWV 1007-1012). Likewise, Clapton waited until later in his vocation to offer his vision of the Delta Phantom who's fragrant essence permeates all of American Music.

Clapton chose for the musical setting of 14 Johnson songs an electric blues band, circa 1945 Memphis/Chicago. His basic set up is two guitars, keyboards (tack piano and organ, provided by the superb Billy Preston), bass, drums and harmonica (blown by Muddy Waters alumnus Jerry Portnoy). Clapton's arrangement philosophy is one framed by the early electric band sound one would have heard in the late '40s in Chicago or Memphis. The band mimics the Muddy Waters/Otis Spann/Walter Jacobs collaborations of the period in its loose, rollicking power. While this setting is not novel for the blues in general, it is daring considering the recorded Johnson was exclusively solo acoustic. Clapton's approach is steeped in the evolution of acoustic rural blues into electric urban blues, a transition state supporting both styles in a tenuous balance between honest fury and refined presentation.

Clapton is largely fingerpicking an electric guitar in the style of Johnson on his acoustic, with mild to wild tube-warm distortion. The mild electric variety of playing is best illustrated on "When You've Got A Friend," "Little Queen of Spades," and "Kind Hearted Woman." Here, Clapton is approaching the songs with what would eventually become the hallmark of Chicago electric blues style. Clapton turns up the heat and distortion on "Milkcow Calf's Blues," and the staggering "Hellhound on my Trail" producing what would be two powerful concert pieces with a corrosively molten momentum decimating all in their path.

Clapton gives a two-step Vaudeville treatment to Johnson's novelty tunes "They're Red Hot" and "Last Fair Deal" both taken at an effect fast tempo. "Me and the Devil Blues" and "Come on in My Kitchen" are lead acoustically with Jerry Portnoy playing undistorted rural harp. Clapton shares guitar duties with Andy Fairweather Low, Doyle Bramhall II, but displays some of his own best slide guitar playing on record (I cite "Come on in My Kitchen" and "Milkcow Calf's Blues"). "If I had Possession over Judgement Day" reprises Clapton's '60s Cream triumph with "Crossroads," which is not represented on this recording.

Me and Mr. Johnson is a significant recording as it represents a coming full circle of Eric Clapton and his life long relationship with the blues. Purists often look down their noses at British Blues and a step child wannabe genre that can, by its very nature, never live up to the "real thing." I have often commented that the tent is big enough for all and ain't it great! I as a policy do not assign star ratings to recordings. However, if I were to , Me and Mr. Johnson would be the first five-out-of-five-star recording I have heard in some time.

Critic's Note: I would encourage all to read Doug Collette's review of Me and Mr. Johnson for a well-reasoned opposing view.