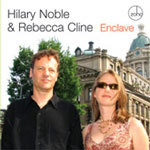 This album offers some very good Latin (and world) jazz performed by two Americans and their quartet but loses some points, in my opinion, for its free jazz aspirations. Hilary Noble, of Boston origin, has studied with George Garzone and logged some good experience with New York City Latin bandleader Bobby Sanabria. This is his second album, and it stands in the same general footprints of another saxophonist who has made a successful career of the study of Cuban music (Jane Bunnett). In addition to having an electric bassist and drummer (Fernando Huergo and Steve Langone), Noble plays not only soprano, tenor, and alto saxophones and flute, but also nine percussion instruments that aren't nailed down. Rebecca Cline studied with Joanne Brackeen and Luis Marin in Puerto Rico plus Chucho Valdes in Cuba.

The title Enclave brings some interesting interpretations, according to the liners. While in English the term refers to areas of singularity that may offer resistance to change, the worlds "en clave," in Spanish, refer to the rhythmic cement that holds together the pulsing style of Latin jazz. The nine tunes on the album are co-written by the two leaders or individually composed by either, plus a reworking of Cole Porter's "You'd Be So Nice to Come Home To."

Noble's saxophones carry the majority of this music and are an important aspect of the finished album. He has a melodic side, but in many cases can't wait to shed it for more adventurous playing, placing him easily within the David Sanchez school of Latin jazz. It would be fair to say that this music is not entirely Cuban but also encorporates healthy amounts of the African aspects of Brazilian and Argentinian music, plus African music itself.

The album begins with two highly pleasurable Latin jazz cookers, "Cher-Nando" and "Viva Friere," with Noble on tenor sax on the first playing it straight, but not without some passing glances toward the outside playing to come. On the second, he picks up the flute (my favorite of his four horns here) and sounds just fine: a typically hot player leading a Latin band. Cline shows off the skills she's attained through her experiences. On "Dragon Slayer" Noble plays the head on soprano sax, then launches into an early '60s Coltrane mode (think pre-A Love Supreme on Impulse).

Yes, it is argumentative, and very much like what Trane was going for then, but in today's marketplace, that's not a big deal for purists. A straight-ahead version of "You'd Be So Nice To Come Home To" was based upon Gonzalo Rubalcaba's 1999 version. "Eleven Ruminations" offers a piano respite with Cline's solo performance. "Once Eleven" once again finds Noble on tenor sax and takes on a fiery tone establishing his intent to take this one out. Cline matches by playing the theme of the above "Eleven Ruminations" in eleven different harmonizations.

"Dark Nebula" begins as a tenor sax ballad (I was hoping) but soon steps up the tempo and becomes a free jazz vehicle. Cline matches with the comping that Noble needs in this setting and, I think, detracts from the rhythmic requirements of a Latin setting. However, by the piano solo, she is back on schedule. The most fever-invoking title, the closing "Rumbanations," is merely a 1:21 melange of squawks.

I'm sure that I can't do justice to summarizing this album. Some listeners will greatly welcome it (and indeed I am one of them), but there are others who will feel that the occasional wandering into outside areas keeps this album from greatness (I am also one of them).