By MARK SULLIVAN
March 6, 2016
Sign in to view read count 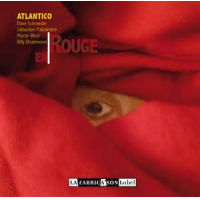 Atlantico is a new band co-lead by French jazz pianist Sebastien Paindestre and U.S. reed and woodwind player Dave Schroeder (each contributes four compositions). Paindestre and Schroeder met in NYU Paris in 2012 during recording for the TV show "jazz rendez-vous" where they played together for the first time. In 2014 they reconvened in New York to record, joined by the stellar rhythm section of Martin Wind (double bass) and Billy Drummond (drums).

The session kicks off with the high-energy title tune (by Paindestre), featuring Schroeder's soprano sax. followed by a lyrical, swinging piano solo. Drummond gets some space to cut loose during the final vamp. Schroeder switches to alto clarinet for his own "Bruce Lee," including a nice duet section with Wind's bass (he also gets a solo later in the tune). This is an instrument we don't hear often enough—it's a lovely, dark sound, but lighter than the larger bass clarinet—although I can't figure out where the title comes from. He uses it again on the appropriately titled "Giuffre Cool" which evokes legendary clarinetist Jimmy Giuffre in both sound and spirit.

Schroeder surprises by playing harmonica on his waltz "No More Words," switching back to soprano for the ballad of the set, Paindestre's "Ellen and Dave." It's a well-balanced set, and just about the time the listener is wondering where the Latin tune is, up pops the closer "Diz 'R' Us," with exactly the mix of Latin and bebop implied by the title. Schroeder pulls out an alto flute for the first and only time on the date, and Paindestre sneaks a sly quotation from Thelonious Monk's "Well, You Needn't" into his solo.