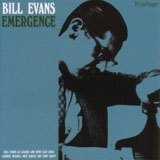 Pianist Bill Evans has become one of the three pervasive influences on that instrument in these early years of the twenty-first century, along with Herbie Hancock and McCoy Tyner. This set gathers together some of his earliest records both as a sideman and a leader and, as such, plots the beginnings of a phenomenon.

One of Evans' earliest gigs was as the pianist in the band of clarinetist Tony Scott, who died at the age of 85 on March 28, 2007. The quartet and tentette tracks gathered here reveal a musician still finding his feet but, equally importantly, one in the midst of discovering himself, musically speaking. This is apparent on "Round About Midnight," where he carries the darkly ambiguous melody almost by force of touch and sensitivity to instrumental color. In these respects he was perhaps Scott's pianist of choice, so well do the musical sensibilities of the two men complement each other.

The six tracks by the George Russell Smalltet undoubtedly offer the purest distillation of African American and European sensibilities that were destined to become a major facet of the pianist's later work, and though the juxtaposition of the two on "Ballad Of Hix Blewitt is a little contrived, the fact that they are reconciled at all is some order of modest achievement, especially if compared to "Ezz-thetic, where an astringent bop line is rendered distinctive by its unusual intervals and the fearsome dexterity of the Evans' right hand.

What really make this collection a useful one-stop for anyone wishing to get a taste of a talent emerging is the fact that two of the last tracks are given over to the trio format in which Evans arguably made his most profound contribution to the jazz canon. On "Five his sense of momentum in such that the argument that he didn't swing seems a little specious, whilst on the solo "Waltz For Debby he manages to conjure out a portrait of innocence and playfulness in less than a minute-and-a-half.

It's clear from this collection that Evans was something of a restless spirit even when he was working under the leadership of others. This, taken in combination with the fact that he's proven to be so enduringly influential, makes it something of a mandatory requirement for anyone interested in jazz piano.