By JOHN EYLES
September 8, 2017
Sign in to view read count
Based on the practices of some other labels, many consumers might have expected new album releases from Steve Lacy (1934-2004) and Paul Rutherford (1940-2007) to be "newly discovered" live recordings of dubious quality or reissues of past studio recordings with previously unreleased outtakes included. However, two new releases on Emanem—a double CD from Lacy and a single from Rutherford—puncture such expectations and set new standards for the quality we should expect of posthumous album releases. In each case, the album sheds new light on its subject rather than rehashing music that is already familiar to followers of them. Most importantly, listeners do not have to make allowances for the quality of the sound or the recordings but can relax and enjoy the music unimpeded.... 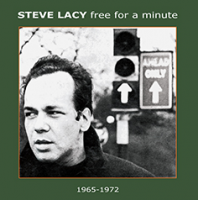 As the dates in its title indicate, Free for a Minute covers a seven-year period out of Steve Lacy's long career, the earliest recordings here dating from December 1965 and the latest from March 1972. Throughout these years the saxophonist's playing was predominantly free improvisation, coinciding with his move from NYC to Europe in the spring of 1965. Free for a Minute opens with the transitional album Disposability, recorded with bassist Kent Carter and drummer Aldo Romano in Rome, which mixed four Lacy pieces with compositions by his former collaborators Monk, Cecil Taylor and Carla Bley.

Compared to past issues of that album, the sound is vastly improved, particularly a badly-recorded cymbal which blighted past issues. Lacy's playing still carries traces of his time playing Monk (as heard on the 2014 Emanem reissue of School Days) but he sounds on the brink of complete freedom, notably on the completely improvised "There We Were." Another album, Sortie, recorded less than two months later, in Milan, adds Enrico Rava on trumpet to the trio. Although the quartet were still playing Lacy compositions, their music was noticeably freer than on Disposability, partly due to the presence of Rava and his interactions with Lacy—thrilling stuff.

Jumping forward to July 1967 in New York, we come onto previously unissued music; a quintet of Lacy, Rava and Carter plus Karl Berger on vibes and piano, and Paul Motian on drums, recorded thirteen "cues" for a never-released film entitled Free Fall (nothing to do with Jimmy Giuffre, by the way). Varying in length from thirty-five seconds up to five-and-a-half minutes, they run for sixteen minutes in total; titles such as "Lisa in the Air," "Dinner" and "Death Scene" hint that the music was intended for particular, and contrasting, scenes. Consequently, while each one has its own atmosphere and merits, they were never intended to be heard together as a suite. Along the way, there are plenty of typical Lacy passages to set the pulse racing and justify the release of this music.

Finally, from 1972—towards the end of this free period—come two previously unreleased tracks, recorded in Paris with Lacy's group of the time—Carter on bass, Steve Potts on alto, Irene Aebi on cello and Noel McGhie on drum set. The tracks "The Rush" and "The Thing," the latter separated into two parts, are Lacy compositions (identifiable as such, like many others, by their two-word titles starting with the definite article) from the time when he was profusely writing material. Despite that, they both fit neatly into Free for a Minute as they are not through-composed but include substantial freely improvised sections, during some of which the main themes seem to be completely forgotten, particularly when Lacy and Potts both take flight and trade phrases. A fitting end to an inspiring album. 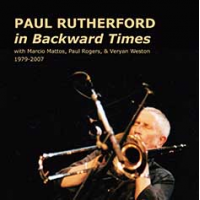 With such essential releases as the 1975 solo album The Gentle Harm of the Bourgeoisie 1975) and the 1996 Rutherford-Rogers duo Rogues, Emanem has been the most important label in establishing Paul Rutherford's reputation as an improvising trombonist without equal. Despite releasing a host of fine Rutherford albums, when going through the Emanem archives the label's proprietor, Martin Davidson, came across four concert recordings that he describes as some of the best music he had heard in ages... hence, this album. Unlike the Lacy album, In Backward Times consists entirely of previously unreleased music, over seventy-five minutes' worth.

Dating from 2004, 1979, 1988 and 2007, respectively, and featuring Rutherford solo on trombone, on trombone & electronics, in a trombone and bass duo, and in a trombone-piano-cello trio, the music presents a rich and varied portrait of him that is powerful evidence of his pre-eminence. In all four contexts, he displays characteristic restraint and sensitivity, consistently producing sounds that are engaging and amusing, often both simultaneously. Solo, with or without electronics, he managed to construct dialogues with himself that invariably draw the listener in. In groups with others, be they duos or trios, he never seemed to hog the limelight but was a generous collaborator; nonetheless, time and again, it is the humanity of his playing that captures listeners' attention.

Altogether, In Backward Times is an extraordinary album, as fine as any other Rutherford release. It is also very poignant. The inner sleeve features a black-and-white photograph of a group of six Royal Air Force musicians on national service in Germany in 1960; on one side stands John Stevens, holding a drum, and on the other stands Rutherford, trombone in hand; the two met in the RAF and, after national service, were instrumental in the birth of free improv in sixties London. In complete contrast, the 2007 trombone-piano-cello trio that closes this album features the very last notes that Rutherford played in public; three months later he died. This album re-emphasises the magnitude of that loss (see video below).

Tracks: Duet for One; Duet for Two; Solo for One; Trio Finale.