By JAMES NADAL
September 14, 2016
Sign in to view read count 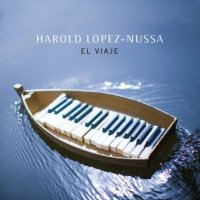 Prodigious pianist Harold López-Nussa has come full circle. With numerous acclaimed recordings, and acknowledged as a seasoned performer on international stages, he returns home and records El Viaje in Havana, Cuba, offering musical insights on the world through his piano. Continuing with his established trio format, which includes his brother Ruy Adrián López-Nussa on drums and Senegalese bassist Alune Wade, he improvises upon vast classical influences while adhering to his Cuban roots, concocting an exceptional style of global jazz.

El Viaje (The Journey) as the name suggests, begins with "Me Voy Pa' Cuba" a song he came up with while on many tours, going back home in his mind, and heart. This is a pianistic ditty which takes on several guises as the tempo accelerates into a frenetic pace, yet the identifying riff remains constant. The drumming becomes dominant on "Africa," as it should be, leading to percussionist Dreiser Durruthy's chanting, raising spiritual connotations and awareness. "Feria," is an Afro-Cuban descarga meets Monk, resulting in an energetic African groove.

A Parisian tinge opens the bolero "Lobo's Cha," leading it into a sensual cha-cha-cha, a study in composition discretion and discipline, as the quiet spaces define the piece. The current dean of Cuban pianists, Chucho Valdes, is honored with "Bacalao Con Pan," a fierce montuno driven number, where López-Nussa demonstrates that he has the technical virtuosity coupled with emotional improvisational ability to perform such a demanding composition. The trumpet phrasing of Mayquel Gonzalez is featured on the title track, which contains echoes from exotic ports of call, enhanced by Alune Wade's alluring vocal intonations. "Mozambique En Mi B," takes it back to Africa while the distinctive Cuban clave set the course for the blistering expedition. The European influence permeates "D' Una Fábula," moderated to allow Wade an expressive bass solo, then transformed into modern fusion. In a display of his multi-faceted style covering the classical, popular and jazz genres "Inspiración En Connecticut," is an explosive contemporary exclamation of breaking out from established parameters, complete with tension releasing singing. The most intriguing song is "Oriente," colored by melancholic trumpeting, it invokes both nostalgia and yearning, conjuring images of a solitary traveler heading into the night, or an unknown destination.

López-Nussa did not begin to play jazz until he was eighteen, but by then he was a perennial winner in the classical competition circuit, and had honed his skills to a razors edge. Jazz for him is about the state of perpetual risk, generated by the heightened reality of improvisation. He has mastered the art of jazz piano, as many before him, by maintaining his individual style, enhanced by an innate sense of rhythm that Cuban pianists possess, thus he does not play or sound like anyone. This release is his invitation to visit Cuba, and enjoy the musical diversity and cultural hospitality the island has to offer, with a world class pianist as host and guide. 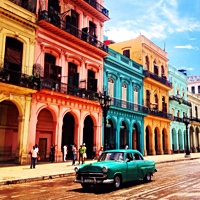