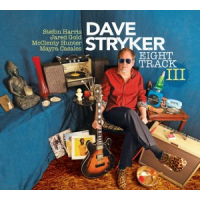 Attuned to the idea that you can never get too much of a good thing, guitarist Dave Stryker has forged sequels to some of his most dynamic projects. From his Steeplechase cannon there are the four volumes of Blue to the Bone and a pair of releases devoted to the electric side of Miles Davis. So when the opportunity came for a third set devoted to reworkings of some of the '70s best soul and pop tunes, Stryker jumped at the chance.

For Eight Track III, vibraphonist Stefon Harris returns to the fold having been a part of the first offering in this series. Based around the type of tunes Stryker used to listen to via the 8-Track player in his old van, the guitarist has become adept at picking jewels from the lot and refashioning them to the purposes of his group including Harris, organist Jared Gold, drummer McClenty Hunter, Jr. and percussionist Mayra Casales.

From the get-go Hunter's rock solid shuffle beat propels Curtis Mayfield's "Move On Up" into inspired territory. Stryker and Harris voice the lead together and it makes for a beguiling sound that lends a special character to the entire recital. Another righteous shuffle gets Steely Dan's "Pretzel Logic" smoldering under Stryker's eloquent lead and subsequent solo.

Hunter's four-to-the-bar rim clicks usher in "Papa Was a Rollin' Stone" only to then give way to a shift in feel for the release that raises this relatively simple number to a higher level of jazz fodder. It's just one of the tracks that illuminates Stryker's astute arranging skills with these numbers. Giving a swing feel to Burt Bacharach's "This Guy's In Love with You" and Stevie Wonder's "Too High" puts these warhorse numbers into a new light and their changes are more than enough fodder to insure quality soloing.

From his pop music days, Roy Ayers hit it big with "Searchin'" and "Everybody Loves the Sunshine." The latter number gives Harris a chance to show what he can do with this "feel good" tune. Be it single note runs or four-mallet chordal passages, Harris is adept at it all and his voice is integral to the success of these numbers. In a similar manner, Gold is one of the few younger jazz organists who has developed a singular voice without resorting to copycat riffs or canned sounds.

One of Stevie Wonder's lesser known trinkets, "Joy Inside My Tears," wraps things up with Hunter's sloshy hi-hats and what sounds like a tambourine on his snare drum. The collective improvisation of the tune's conclusion is a beautifully articulated moment that bookmarks another satisfying collection.