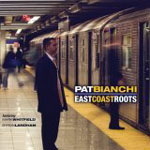 The leadership debut by Colorado-based organist Pat Bianchi most assuredly speaks of his East Coast Roots from its first notes. In the company of guitarist Mark Whitfield and drummer Byron Landham, Bianchi offers an East Coast burn virtually throughout, lightening the smokin' atmosphere only on "Little B's Poem," "Theme for Ernie" and, to a degree, "Turn Out the Stars."

With Whitfield matching or surpassing Bianchi's playing from an inspiration standpoint, and Landham driving the whole affair along at a largely torrid pace, it can be said that on occasion there's a bit too much of a good and swinging thing, if that's possible. Bianchi's B3 stylistic links to Jimmy Smith and Joey DeFrancesco are clear, along with their chopsmeister technical prowess.

The CD opens with the driving "Silver Trane," by Canadian pianist Bernie Senensky, then eases to a ballad pace for Bobby Hutcherson's "Little B's Poem" before heating up again with John Coltrane's "Straight Street" and Jimmy Heath's "Gingerbread Boy." Things slow for Fred Lacy's "Theme for Ernie," the first of two live tracks recorded at a Denver lounge the night before the studio session. "Dizzy's Business," by Ernie Wilkins, kicks it up again, then the trio takes on Bill Evans's "Turn Out the Stars" in a respectful but lightly swinging mode. The album closes with the second live track, the standard "Nobody Else But Me."

Whitfield's work throughout this album makes one wonder why he isn't being heard and recorded more often. Perhaps it's just the glut of fine guitar players on the current scene.