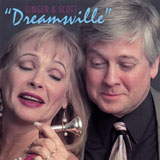 The first song I heard Ginger Berglund and Scott Whitfield sing together was Tommy Wolfe/Fran Landesman's clever ode to mutual admiration, "You Inspire Me. I loved it then, thought they made a great team, and am happy to have more permanent evidence of their charming compatibility and remarkable talent.

"You Inspire Me is one of several tunes on Ginger & Scott's debut album that call to mind their exemplary role models, Jackie Cain and Roy Kral. Like Jackie & Roy, Ginger & Scott sing with warmth, awareness and sincerity, combining urbane lyrics with enchanting melodies and sharp interplay to create music that ensnares the mind as well as the heart.

Foremost among the savvy themes is Ginger & Scott's own upbeat composition, "Pardon Me While I Fall in Love, an explicit highlight whose sunny syntax suits them to a T. Also earning high marks for sagacious lyrics are the Wolfe/Landesman ballad "Listen, Little Girl, Dave Frishberg's "Wheelers and Dealers and Bob Dorough's "But for Now." Scott co-wrote the perky bossa "Come to Me with Linda Miller, the sensuous ballad "Lorelei with Bebe Herring.

The standards were chosen with care, from Frank Loesser's seductive "Slow Boat to China to Sammy Cahn/Jimmy Van Heusen's "All My Tomorrows (another high spot) and the closing medleys, "Dream Dancing/Dancing in the Dark and "How High the Moon/Ornithology. Although it gives the duo a chance to scat (as they do on "Ornithology ), their lone misstep occurs on Irving Berlin's "The Best Thing for You, whose memorable lyric warrants a more moderate tempo (but they do earn extra points for including the verse).

Everything else is pure gold, marking Ginger & Scott as worthy successors to Jackie & Roy. As a bonus, they've surrounded themselves with the most admirable musical partners friendship can buy including special guest pianist Bob Florence, who accompanies them on their solo numbers—Ginger on "Listen, Little Girl and Scott on "Lorelei. Equally impressive are saxophonist/flautist Roger Neumann, pianist Corey Allen, bassist Jennifer Leitham and drummer Kendall Kay. To further heighten the energy level, Scott unlimbers his supple trombone to add persuasive commentary on half a dozen numbers, even trading four-bar phrases with his own scatting voice on "Ornithology.

As one who has waited a long time for a vocal duo as refreshing as this one to appear, I can say with emphatic assurance that Ginger & Scott are the real deal and that Dreamsville is a marvelous album, one whose kinship to Jackie & Roy makes it even more engaging and special.

On a Slow Boat to China; Come to Me; All My Tomorrows; Pardon Me While I Fall in Love; Dreamsville; The Wheelers and Dealers; Listen, Little Girl; You Inspire Me; Lorelei; The Best Thing for You; But for Now; Dream Dancing/Dancing in the Dark; How High the Moon/Ornithology.