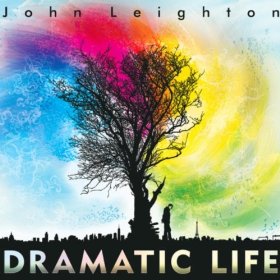 Jazz composers can be inspired by the oddest things, but it's rare to find inspiration coming from those seminal icons of the nineteenth century, Florence Nightingale and John Keats. Northern Ireland-based pianist/songwriter John Leighton puts that right on his beautiful debut, Dramatic Life, and it isn't just his inspirations that are original.

Leighton's chosen musical compatriots are superb. The pianist wrote the songs, but leaves Anna Stott to deliver the lyrics, and she does so with an appealing purity. American bassist Michael Janisch and Irish drummer/label owner, David Lyttle have worked together for some time, and their relationship grows stronger with each performance. Lyttle's background in Irish traditional music and his love of reggae give him a bright and upbeat style, creating a distinctive, folk-inspired sound on the story of little Emmi and "The Dress."

Guitarist Mark McKnight and wind player Michael Buckley are key musicians in Ireland's small but talented jazz scene. McKnight's atmospheric playing is not always to the fore in the mix, but is central to the mood of much of this music. Buckley's playing is more upfront, his soprano work on "A Thing Of Beauty Is A Joy Forever" and "Ameltie" being particularly lovely. Both players shine on "Whin Bush," with some tight unison playing as well as a couple of excellent solos.

"Married The Messenger" is the song that name checks Florence Nightingale. Within its 14 lines, Leighton tells of a death in the Crimea, the grief of a widow and the requited love of the man who delivers the news, with a combination of economy and vivid imagery that great blues writers like Willie Dixon would be proud of.

Keats, the great Romantic poet, has clearly had an impact on Leighton. There's a song in his honor—"For Keats"—and Stott's spoken word rendition of "A Thing Of Beauty Is A Joy Forever." There's a romantic feel to much of Dramatic Life that Keats could well have inspired. "Ameltie" typifies this, with a simple yet affecting lyric and beautiful playing from Leighton and Buckley. So, too, does the up-tempo "Precious Life," even with its mid-section resembling the sound of '80s Brit-jazzers Working Week.

There's an originality and freshness to the songs on Dramatic Life. Whether it's his inspirations, direct but romantic lyrics or slightly quirky musical twists and turns, Leighton's writing is constantly intriguing and involving. Stott's occasionally fragile but always evocative voice heightens the impact of the word,s while the excellent band invests the music with a real spark of life. There's a neat touch on the cover, too. The city skyline features iconic buildings from London, New York, Paris and, finally, the shipyard cranes of Belfast. Dramatic Life is an emphatic statement of Leighton's talent, and yet more evidence of the potential of the new Northern Ireland jazz scene.

Married the Messenger; Ameltie; Precious Life; For Keats; The Dress; Nothing To Gain; Whin Bush; A Thing Of Beauty Is A Joy Forever.