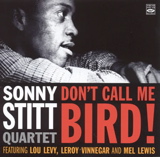 Absolute Distribution, a Spanish consortium of labels, has done it again, following up last year's welcome single-disc reissue (at least outside the U.S.) of Stitt's 1970s Cobblestone sessions, Tune-Up! + Constellation, with two 1959 West Coast dates for Verve featuring Stitt on alto with a crack California rhythm section. Even though a first-time reissue, the disc is scarce domestically, but the musical content and production values make it well worth the search. A listener familiar with Stitt's tenor duel with Sonny Rollins on "The Eternal Triangle" (Sonny Side Up, Verve 1957) might question the back-cover blurb proclaiming alto as Stitt's "prime horn." But it's true that on tenor Stitt often could be more basic, more predictable, more prone to emphasize "communication" over invention, supported during the 1960s by a Hammond B3 and his electronic Varitone attachment.

A proud man of few and sharply-aimed words, one can easily hear him practically snarling "Don't call me Bird!"—not to make the point that Charlie Parker was superior or inferior but that Sonny Stitt was his own man. From Stitt's perspective, musicians like Louis Armstrong, Lester Young and Art Tatum had a greater influence on his alto style than Parker.

As the liner notes suggest, Stitt was always mindful of two things: melody and perfection. He once called the prodigious Art Tatum's playing commendably "simple" because it never strayed far from the main melody. And that's one of the reasons Sonny Stitt can be especially challenging. Besides the primary melody, he's playing secondary melodies in between phrases and tertiary melodies on the turnarounds, in a mere four bars executing at levels of speed and perfection unheard of before the arrival of Parker, who was Stitt's senior by just over three years.

The all-star rhythm section isn't overly aggressive but provides just enough "give" to allow Stitt the breathing room he thrives on. The session kicks into high gear on "Sunday," on which Stitt is simply flying— ironically he would barely get off the ground when he called the same tune on a later date with Art Blakey and McCoy Tyner (A Jazz Message, Impulse 1963). On "All of Me" the altoist double-times the greater part of his solo, before capping it with notes played an entire octave above the normal register of the horn. After a soulful reflection with "The Gipsy," Stitt's rare vocal on his own "That's the Way to Be" is a sheer delight. Finally, as a "So there!" clincher to all those who would write him off as a Bird clone, the soloist switches to tenor for "The Way You Look Tonight."

On both horns, Stitt's tone is clear, honest and true, an "embodied" and direct sound. Like his lean and lithe physique, his lines lead right to the heart of the matter—lucid, logical, impeccable. In fact, other than Tatum, it's hard to think of a more "perfect" player. Stitt was no innovator, but he had few equals at fashioning masterly, complete narratives out of a language already in place. And compared to either Tatum or Parker, Stitt's music is more deeply rooted in the blues, as manifested by three of the Stitt originals on this rewarding album.

I Cover the Waterfront; Lazy Bones; Sunday; Just Friends; All of Me; Two Bad Days Blues; It's You or No One; Blue Smile; Lonesome Road; The Gipsy; That's the Way to Be; There Is No Greater Love; Jaunty; Blue Sunday; The Way You Look Tonight