By JOHN BALLON
November 4, 2003
Sign in to view read count 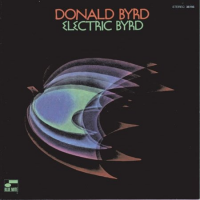 Considered by some to be trumpeter Donald Byrd's last worthwhile jazz recording, Electric Byrd is a high-flying relic from 1970. This album can be understood as Byrd's formidable response to the musical challenges set down by trumpet-rival Miles Davis with his epic Bitches Brew recordings from a year earlier. Clearly Miles is the ghost presence here, with distinct echoes of his sound permeating the vibe of this exploratory set. Byrd demonstrates on his three originals that he, too, was a force to be reckoned with. The supremely atmospheric "Estavanico" opens the album, inventively fusing together elements of funk, psychedelica, Brazilian music, and hard-bop to create a truly transcendent groove. Clocking in at around 11 glorious minutes in length, "Estavanico" is an absolute masterpiece and must be heard by all fans of the Bitches Brew.

The second track, "Essence," begins with some African-sounding stringed instrument plucking out an intricate tribal rhythm. Wally Richardson's wah-pedaled guitar growls underneath with heavy restraint. Funky sounds flow forth from the rhythm section, comprised of pianist Duke Pearson, bassist Ron Carter, and drummer Mickey Roker. Roker's inventive and energetic playing is a classic example of why a band is only as good as its drummer. Saxophonist Frank Foster, a veteran of the Count Basie Band, explores the wondrous possibilities of the echo-effect, playing a mean sounding tenor that reverberates between your ears long after he's stopped. Brazilian percussion master, Airto Moreira, takes the music up another notch with his exotic rhythms. Airto also contributes a memorable original, "Xibaba," a Brazilian spiced, acid-laced groove that opens with Byrd's distorted trumpet echoing out Middle-Eastern sounding riffs that could be blasted from the minarets beckoning the faithful to pray. After a somewhat ponderous opening, "Xibaba" heats-up with complex arrangements, cosmic sound effects, and swirling rhythms.

"The Dude" closes the record with one of the heaviest grooves ever set down by any jazz artist—an absolute classic that deserves space on any funky mix you might want to make for your friends. And with a name like "The Dude," how could it be anything other than bad-assed? Move over Lebowski. An album often lumped in with Donald Byrd's more artistically barren work of the 1970s, Electric Byrd is a misunderstood masterpiece that should be investigated.