Domenico Scarlatti: An Introduction to the Keyboard Sonatas 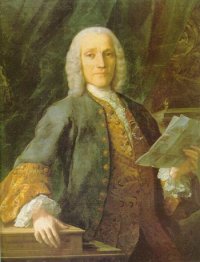 Naxos Records began recording the complete keyboard sonatas of Italian Baroque composer Domenico Scarlatti at the close of the 1990s, with the release of Complete Keyboard Sonatas, Vol. 1 (Naxos, 1999). The years since have resulted in 10 more of a projected 35 volumes series. Scarlatti's keyboard music is easily accessible and enjoyable by listeners of all experience levels. As an introduction to a series of reviews of these releases in this collection, here is a brief introduction to Scarlatti and the modern interpretations of his music.

Giuseppe Domenico Scarlatti (1685-1757) was born in Naples, the sixth of ten children of the baroque composer Alessandro Scarlatti and Antonia Anzalone. While sharing his birth year with two other notable Baroque composers, Johann Sebastian Bach and George Frederic Handel, Scarlatti's unique compositional vision rested on the fulcrum of the baroque period as it gave way to the Classical period.

Scarlatti was thought to have received his early training from his famous father. During his early life into adulthood, Scarlatti traveled widely, spending time in Florence, where he met keyboard maker Bartolomeo Cristofori, who was then experimenting with transforming keyboard playing from the plucked-action harpsichord to the hammer-action of his gravicembalo col piano e forte. Scarlatti visited Rome and then Venice, where he met the famous castratos Nicolo Grimaldi and Farinelli (Carlo Broschi), and the latter who has provided through his letters the lion's share of what is known about Scarlatti's adult life. It was also on this sojourn, the composer made the acquaintances of composers Gasparini, Vivaldi, and Handel.

This meeting with Handel was fortuitous as it led to a later anecdotal meeting of the two musicians resulting in a &amp;quot;contest of virtuosity&amp;quot; where Handel was to have bested Scarlatti at the organ while Scarlatti out-did Handel on the harpsichord. Whether spurious or true, the story makes for great drama and the consideration of such a concentration of genius in Venice in the 18th Century. Too bad we have no cook-off between Scarlatti, Handel, and Bach. That would have been some birthday party.

Scarlatti distinguished himself in a variety of compositional vehicles including opera, oratorio, and sacred music, having held several notable positions in Spain and Portugal. But what Scarlatti is most prominently remembered for are 555 short sonatas for keyboard written originally as Essercizi (Exercises). When he died in Madrid, Scarlatti left a treasury of his harpsichord sonatas manuscripts, which were largely unplayed beyond Spain and Portugal until pianist Carl Czerny published a selection of the sonatas in 1839.

Subsequent publication of an ostensibly complete set of sonatas was made by Alessandro Longo (the order of the sonatas designated with a set of numbers), who provided the first systematic designation of the sonatas in 1906. Ralph Kirkpatrick added to and reorganized the sonatas (designating them with a second numbering system) in a 1953 critical edition considered de rigueur for Scarlatti performance. In 1967, Giorgio Pestelli published the most recent accepted edition of the sonatas using a third system.

The majority of Scarlatti's 555 sonatas were envisioned in pairs with one sonata in minor key and its partner in the corresponding major key, but both of the pair more often than sharing the tonic. Beyond this tonal relationship, these sonata pairs existed dynamically in contrast or complement. Sonata pairs with a complementary association may share stylistic agreement or harmonic palette. Those pairs that contrast one another may do so in tempos or compositional complexity. The result is an almost inexhaustible collection of keyboard pieces, all of high artistic quality and accessibility.

Scarlatti's keyboard corpus is an almost inexhaustible assembly of music and becomes infinitely inexhaustible when considering recorded performances. Scarlatti has received much attention since the 1940s when master harpsichordist Wanda Landowska recorded her landmark collections. Landowska, who was uncompromising with her Bach (Landowska to Pablo Casals: &amp;quot;You play Bach your way, and I'll play Bach his way&amp;quot;) certainly took her liberties with Scarlatti. Nevertheless, her Angel recordings are uniformly fine displaying not only Landowska's iconoclastic streak, but also mid-20th century Scarlatti thinking.

Others recorded Scarlatti using a harpsichord, most notably Ralph Kirkpatrick, whose 1950s era critical edition is still widely referenced. Kirkpatrick's playing is faithful and his Archiv discs beautifully captured. Scott Ross recorded all 555 sonatas on harpsichord and organ on 34 discs, originally for Erato, but now available on Warner Classics. Ross has staying power. Pieter-Jan Belder is currently working on a complete set for Brilliant Classics, performed on both harpsichord and piano, which he is recording in Kirkpatrick numerical order.

A revolution akin to that detonated by Glenn Gould's 1955 piano recording of Bach's Goldberg Variations (Sony, 2003) occurred with Vladimir Horowitz's 1964 recording Horowitz Plays Scarlatti (Sony, 2003), which effectively put Scarlatti on the map in the 20th century. For the Scarlatti novice, this Horowitz is the place to start. In spite of the pianist's reputation for being a high Romantic, Horowitz had a great affinity for Bach, Scarlatti, Clementi (another favored Horowitz composer), Haydn, and Mozart. The playing, for sure, is Vladimir Horowitz, and aside from a booming left hand, he is more faithful to Scarlatti than Landowska.

Naxos enters the Scarlatti fray with a complete series, using different pianists for each set.