By NENAD GEORGIEVSKI
October 31, 2018
Sign in to view read count 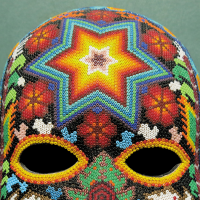 In Greek mythology, Dionysus represents the god of the grape harvest, winemaking, and wine, of fertility, ritual madness, religious ecstasy, and theatre. In ancient times, he was worshipped fondly by his followers with cultural festivities, wine-induced ritualistic dances, intense and violent orgies, and secretive various depictions of drunken revelry (the Dionysian Mysteries). What he embodied was the intoxicating portion of nature. The worship began as a celebration of culture, with plays and processions, and progressed into a cult that was shrouded in mystery. It was characterized by a worshipper's powerful identification with and emotional connection to the god. The rituals behind the celebrations and the symbolism of creative renewal is what provides the creative impetus behind Dead Can Dance's album Dionysus.

The Dead Can Dance's creative force, vocalist Lisa Gerrard and multi-instrumentalist Brendan Perry first met in Melbourne in 1979 and developed through the same "new wave" music scene as singer Nick Cave. They formed the band Dead Can Dance in 1981 and the duo has been creating boundary-breaking music ever since. Throughout their career, both Gerrard and Perry have proven to be unique sonic architects who never relied on blueprints. Over the years, the duo went to reap a rich harvest of influences as diverse as Renaissance music, Spanish and Celtic folk music, ancient forms of music, Gregorian Chants, Balkan folk music, music from the Middle East along with Joy Division and Scott Walker influences and vocals, ambient music that were mixed with ethnic African rhythms into a mélange that was uniquely their own. On top of that were incantatory wordless vocalizations by Gerrard, which was steeped in the older melismatic traditions and Perry's dark tenor that added to their yin- yang relationship and work approach.

Musically, Dionysus is an impressive and ambitious amalgam of the band's previous leanings like the sampled and kaleidoscopic nature of Into the Labyrinth (4AD, 1993) and the percussion dominated Spiritchaser. (4AD, 1998). There are no songs here in a classical sense as it was done on their previous records. The song format was completely eschewed as a concept. Divided in two compositions that are further subdivided into several movements, the duo took the constituent elements of some of its past and further refined them into an enormous sound bathed in a myriad of melodies and polyrhythms. Each of these acts and their movements has distinct moods and ambiances that reveal varied soundworlds with fresh nuances and facets with each new listen. As a result, Dead Can Dance creates a non-linear, genre-less concoction that merges tribal beats, ambient sounds, folk instruments like bagpipes, Bulgarian choirs, dulcimers, highly-manipulated samples into a decontextualized whole, an idea that is close to composer and conceptualist Jon Hassell's concepts of Fourth World Music. As a result, literally, the listener is transmuted in both geography and dimension.

The opening movement "Sea Borne" is built on dense and dizzy layers of loops and beats that are overwhelmed by interspersing ethereal, windswept vocal textures that resonate like gigantic springs. All movements seamlessly transit into the next. "Liberator of Minds" is built on layers of percussion and Middle Eastern melodies and various vocal chants. "Dance of the Bacchantes" mixes various types of percussions, the Brazilian berimbau instrument, and an annoying synthesizer that imitates bagpipes, hand claps, vocal choirs (that seems to resemble Serbian women choir), Moroccan ululations and sounds from both Eastern and Western traditions that are intertwined within a dense forest of sounds and orchestrations. The pacing of this movement literally drives the listener into a frenzied ecstasy. Truly, there is a spiritual and even magical quality to this music.

While the first act doesn't really reveal easily the fact that this is DCD music as there aren't any of their characteristic vocals and song formats, the second act "ACT II: The Mountain -The Invocation -The Forest—Psychopomp" reveals more of their presence. "Mountain" delves deeper into Balkans music with its opening melodies on bagpipes that are sprinkled with Moroccan ululations and are augmented by tribal beats. Very soon the familiar vocals chants by Perry and Gerrard are heard and a wave of familiarity washes over. There is a call and response duet between Perry and Gerrard's radiant vocals which resemble a Bulgarian choir chants. This movement then morphs into the next just by using sounds of bells and goats.

"The Invocation" uses samples of Bulgarian choir possibly "The Mystery of the Bulgarian Voices" with whom Gerrard has recorded and performed recently (Prophecy, 2018). This is not the first time she has worked with musicians in Bulgaria as she even performed with the Genesis orchestra in Sofia in early 2018. The choir's chants are re-contextualized as DCD builds all kinds of sounds around them and at one point the vocals just chant a different kind of melody. "The Forest" feels more like it might have come from the Spiritchaser album with its percussive beats, Arabic orchestrations, and shimmering electronics and Perry's lead vocals."Psychopomp" has a different sound aesthetics and it actually feels as if it was recorded in a tropical jungle with its sounds, whistles and rattles, and characteristic electronics as DCD weaves music that is both evocative and plaintive.

Dead Can Dance has always explored the intersections between genres, geographies, sounds, cultures, modern and primitive, folk music and contemporary music. All throughout their illustrious career, the duo has been both purveyors and seekers of transcendent cultural experiences. Dionysus is thoughtful in its construction, unfurling in a dreamy fantasia that is imaginative, colorful and intriguing. It fits perfectly into the continuum of DCD's entire career. But at moments its dense nature makes it feel like it's a kind of construction project. Every sound has been meticulously built and each second has been crammed with sounds as if the listeners might be bored. Still, the album feels adventurous and challenging with its multidimensional trance groove trajectory that envelops the listener with its mysteries and visionary power. Their elastic musical approach suggests that the world is a cultural continuum and not a series of segmented and isolated spaces. Like DCD's other works, Dionysus takes travelers on a nocturnal pilgrimage through uncharted places of worship made of sound, which are at the same time strange and oddly familiar. As such, this album is a soundtrack for the spirit.

ACT I: Sea Borne - Liberator of Minds - Dance of the Bacchantes ACT II: The Mountain - The Invocation - The Forest – Psychopomp

About Dead Can Dance