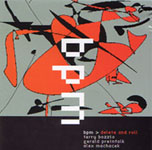 The story of this unusual trio began in 1998, when master percussionist Terry Bozzio was invited to perform his "Chamber Works for Drum set, String Quartet and Woodwind Quintet" live in Vienna/Austria. Originally recorded using technology "enabling Terry to literally have an orchestra at his fingertips", the Viennese world premiere of these pieces took place on 26th August 1998 and featured live string and woodwind sections, for which two of Austria's finest musicians, Preinfalk and Machacek wrote scores.

To flesh out the evening of chamber ensemble pieces, the trio of Bozzio,Preinfalk and Machacek played a couple of Machacek/Preinfalk penned trio tunes which went down pretty well. Those early versions of "Aug Um Aug", "I Rememeber Edison" and "S150" were settled somewhere between more loose, jazz oriented trio formats (Chico Hamilton's guitar/sax/drums trio from 1993 comes to mind) and formally disciplined, highly structured, Zappa-esque chamber music, with enough room for virtuoso solos by all three musicians. Plans for a trio album soon came up, but didn't materialize before summer 2001, when working schedules allowed a time window to gather at Terry Bozzio's home studio in Austin, Texas. Recorded live to harddisc (which for a couple of days was missing in transit to Austria due to the events of September 11, but fortunately resurfaced later), those recording sessions provided enough material to keep producer Alex Machacek busy with editing and minor overdubs during Fall, Winter and Spring 2001/2002. In late September 2001 the trio (adopting the moniker "BPM") played three shows in Austria, roadtesting the new material. Though their stripped-down trio concept worked overall, it proved somehow difficult to reproduce the balanced soundscape of the studio pieces in a live situation.

By the time the CD Delete And Roll (the title hinting at frequent experience during the original recording sessions) was released in May, those problems were solved and BPM embarked on a highly successful two-weeks tour of central Europe, playing solid packed clubs in Austria, Germay and Switzerland.

The album Delete And Roll is out and out off-mainstream, an interesting and adventurous amalgam of various musical influences and a brave statement of non-conformist creativity in general. Giving stylistical clues and pointing out to references is always dangerous business (and may even annoy the artist), however I feel it isn't totally wrong to identify elements in BPM's music, that may strongly appeal to listeners who like Zappa's rhythmically complex patterns, atmospheric guitar synth backdrops reminiscent of Nordic ECM releases and fluid legato guitar solos not overly influenced by Allan Holdsworth. Reviewer Dick Heath even mentioned a certain Canterbury/Soft Machine influence in BPM's quirkier moments, namely in Gerald Preinfalk's sax excursions, which indeed evokes a distant Elton Dean feel. As with allhis recordings in recent years, Bozzio incorporates elements of his earlier experiments with drum ostinato here too, and he (together with Preinfalk) may also be responsible for occasional flirts with oriental and Eastern European ethno music ("Bulgarianish Folkdance"). Especially in guitarist and main composer Alex Machacek's case it's interesting to see his compositions shifting from the colourful and lavishly arranged jazzrock of his acclaimed 1999 album Featuring Ourselves to more sparse and angular, formally detailed tunes. Even the often mentioned Holdsworth influence in Alex Machacek's guitar playing isn't that evident here.

Having always been a great admirer of the late Frank Zappa and a bonafide connoisseur of FZ's complex semi-classical work, Alex Machacek and similar interested drummer Bozzio pay tribute to FZ in the opening section of "Strafe", the main theme in "Austin Powers" (a different arrangement of this tune may end up on Alex Machacek's next solo album) and most notably on "S150", one hell of piece, pushed forward by sick unison runs and solos at breakneck speed.

Gerald Preinfalk's "Invisible" displays it's true maturity on the studio recording and stands up as one of the best tunes on the album. A (possibly sequenced) bass clarinet riff accompanies Alex Machacek's soulful electric guitar solo, then gives way to Bozzio's dramatic bass drum kicks over thick guitar synth textures, making up the perfect background for a final melancholic alto solo.

A jazzy version of "Auf um Aug" combines xenochronous live recordings from September 2001, with heads and sax solo from Hoechst/Austria (Sept 27) and a fierce guitar solo recorded two days later at Vienna's Porgy & Bess. For me Bozzio's greatest moments can be heard on "I Remember Edison", with an unrelentless bass drum pulse creating a thrilling tension throughout. The man's use of a vast arsenal of percussion instruments is awesome here and demonstrates how far ahead he is in this particular musical area. When the piece reaches it's climax, Terry literally attacks his kit, while Machacek's clean guitar and Preinfalk's wailing soprano sax send shivers down the listener's spine.

Here it is, BPM's Delete And Roll --- an excellent crossover album at the fringe of jazz, fusion, avant-garde prog-rock and their numerous sub-genres.

The CD can be ordered from Terry Bozzio's webstore at: www.terrybozzio.com and should soon be available at audiophileimports.com