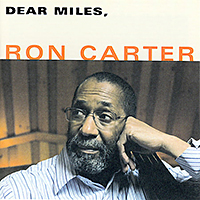 The fact that the late iconic trumpeter Miles Davis still generates controversy is a real indicator of his earth-shaking impact on the genre. What's your favorite Miles debate: Acoustic Miles, or Electric Miles? Kind of Blue (Legacy, 1959), or Bitches Brew Legacy, 1969)? Bill Evans, or Bill Evans? Tutu: An affront to all that's good and true, or just a really bad career move?

As one-fifth of the "second great Miles Davis Quintet, bassist Ron Carter had a ringside seat for Miles' transition from jazz icon to jazz-fusion hero (or heretic, depending on your world view). Although he's taken part in Four Generations of Miles and VSOP, Carter has kept his own recording efforts away from the burgeoning Miles-tribute-disc market, out of respect for his former leader. Then again, it could be a case of "Take your time, do it right. Carter has definitely done it right on Dear Miles, the bassist's second great release of 2007.

While recent tributes by saxophonist Dave Leibman and trombonist Conrad Herwig operate on a macro scale, Carter goes the other way, using his working quartet to forge an impeccably nuanced set that links several of Miles' early phases with the 1960s unit Carter anchored. When you break it down, Carter's quartet is a four-piece rhythm section, and that makes for a satisfyingly aggressive final product, even in Dear Miles' quietest moments.

Technically, a piano is a percussion instrument, and Stephen Scott amply demonstrates that capacity. His solos on Gil Evans' "Gone and Milt Jackson's "Bag's Groove evoke McCoy Tyner in his prime, and Scott's swirling performance on "Someday My Prince Will Come knocks Brubeck's stellar version right out of the park. Peyton Crossley's drums bubble and burst, with his best moment being his hot solo on "Cut and Paste, one of two new Carter originals. Roger Squitero proves little things do a lot: A burst of shaker on the bluesy "Bye Bye Blackbird, distant chimes on a gorgeous "Stella by Starlight, and a boiling Latin conga solo on "Seven Steps to Heaven add texture and drama to works that are already exhilarating.

You only need to hear Carter's emotional solo on "Stella or his wonderful dialogue with Scott on "My Funny Valentine to know he is still the heavyweight champion of bass. He doesn't play it safe either: Miles never recorded "As Time Goes By, but Carter adds this brilliant take in tribute to Miles' ability to "find a song no one else has tried and make (his version) essential to the jazz songbook. Including new tunes on a tribute is frowned upon, but "Cut and Paste and "595 are perfect fits with Miles' music—"595 especially, since Scott's piano lines are definite descendants of Bill Evans work on "So What.

Dear Miles is a fantastic set of bold interpretations; it is respectful to its subject while never losing its need to be unique. I'd say that sounds like Miles to a T.