By ROGER FARBEY
January 9, 2019
Sign in to view read count 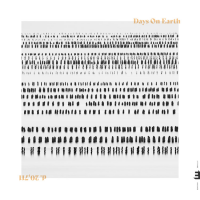 Mark Lockheart's Days On Earth encapsulates the term fusion in its most literal sense. This actually refers to the amalgamation of two different species of music; jazz and classical. It was deliberately organised so that the individual musicians from each respective genre were paired with their opposite number from "the other side." Something akin to footballers marking their opponents or parliamentary pairings during a vote. Pairing examples include flautists Roland Sutherland (jazz) with Anna Noakes (classical) or clarinettists James Allsopp (jazz) with Nick Rodwell (classical). This device works well, so well in fact that it's pretty much a seamless operation.

The first bars of the opener, "A View From Above" are deceptive, giving the impression of contemporary classical rather than jazz, but within around thirty seconds, the number transitions safely into a melodious Birth Of The Cool feel. However it progresses to something more complex than Miles Davis's landmark album. There's resistance and tension amongst the florid melodies. "This Much I Know" is a strongly rhythmic number with an insistent groove and an almost subliminal Eastern influence all enveloped in Western classical form. The mood changes radically with the irrepressibly upbeat, Latin flavoured "Party Animal," which undergoes a reflective sea-change half way through with a calming addition of strings.

"Long Way Gone" is a joyously memorable finale involving a criss-crossing arrangement which epitomises the sheer accessibility of Lockheart's magnificent creation. As one of Britain's most accomplished saxophonists, Lockheart, a founder member of the illustrious Loose Tubes big band and more recently a member of Seb Rochford's Polar Bear, consistently produces recordings that are significant and fascinating. Days On Earth is no exception and as his most ambitious album to date, definitely invites repeated plays, the better to savour the intricate nuances contained within.

A View From Above; Brave World; This Much I Know Is True; Party Animal; Believers; Triana; Long Way Gone.