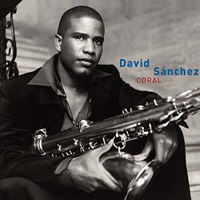 I once loaned my cherished copy of Clifford Brown with Strings to a German friend who had loaned me Dexter Gordon's Ballads in return. When it came time to reclaim our respective CDs, I asked her what she thought of the Brownie disc. "Very pretty," she said, "but a bit kitsch."

This duality has plagued the whole ...with Strings franchise (Cannonball, Charlie Parker, Ben Webster, and so on) as well as any other project that unites a jazz musician with a string orchestra. Those lush arrangements, that glistening sound, the thrill of orchestral standardization enhanced by solo improvisation - it's all very moving, even stunning at times. And it's also a bit sticky-sweet, candy coated.

David Sánchez's Coral , a collection of Latin classical and jazz works that the tenor saxophonist recorded with the Prague Philharmonic Orchestra and his own working sextet, has not been able to elude either characteristic of this hybrid style. A fluty cuckoo like the one in Beethoven's Pastorale Symphony heralds the first track, the Antonio Carlos Jobim ballad "Eu Sei Que Vou Te Amar," and we half-expect Sinatra to begin crooning. Instead Sánchez comes in with his sepia-tinged sax, an entrance replete with the sprinkle of chimes and the wistful snare brushes. Beautiful. Kitsch.

Jobim gets another showing on "Matita Perê," a track that highlights conductor/arranger Carlos Franzetti's robust scoring on the album. Flutes whorl and eddy; the woodwinds tumble and roll; the brass section occasionally calls from the distance, asking a response from the strings. As momentum builds, drummer Adam Cruz works into an ever spicier drumline. Cruz is joined by Pernell Saturnino on percussion, so that in time every one of the listener's limbs demand to move in a different direction. In addition to Sánchez's extended solo, pianist Edsel Gomez uses his chance in the spotlight in a cool, unassuming manner, though never letting his instrument drown among the orchestra.

There are two compositions by Alberto Ginastera, "Panambi" and the rather drum-heavy "Vidala," as well as one by Franzetti ("Vexilla Regis"), one by Heitor Villa-Lobos ("Coral") and two by Sánchez himself, "Canción del Cañaveral" and the bipolar, chaotic "The Elements II." Alto saxophonist Miguel Zenón makes guest appearances on four of these. During his solo on the Villa-Lobos arrangement, there is a point when he is simply awash in strings and romancing the upper register of his instrument, and here the project does slip into pure sappiness. But even at its most sentimental, the songs on Coral are always in earnest, carried out with enviable skill and an eye (or ear) toward sheer enjoyment. Odds are that it would also be excellent live.

Before closing, it's important to note the pitfalls of the extreme copy protection measures used on Coral and all other current Sony/Columbia releases. An accident resulted in my review copy getting severely scratched. Had I been able to make a fair-use backup copy beforehand, this wouldn't have been much of a problem; but as it was, I was forced to request a second copy from the public relations company. Given a similar misfortune, retail buyers will not be so lucky.

Visit David Sánchez on the web at www.davidsanchezmusic.com .