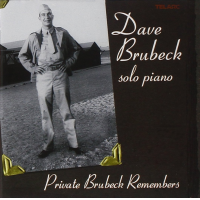 Perhaps the most intriguing aspect of Telarc International's release of Private Brubeck Remembers is the timing. From a historical standpoint, the 60th anniversary of D-Day—the Allied Invasion of Normandy Beach in France—coincides closely with the scheduled May 25th release date of this introspective and beautiful interpretation of songs from that historic period in world history. But from a contemporary view, as our nation finds itself in the midst of another war, loved ones again are faced with the heavy burden of saying goodbye to a new generation of citizen soldiers sent to fight in a foreign land.

At age 23 and headed for the front, Pfc. David Brubeck volunteered to entertain the rest of the troops by playing a few songs on a Red Cross piano. Hearing Brubeck play, a colonel insisted that he stay behind and form a band. As head of the Wolf Pack Band, Brubeck spent the rest of his military service as a musician and entertainer, performing many of the songs contained on this collection of solo renditions of some of the most famous songs from World War II.

"The titles of the tunes are almost an autobiography of my war years," says Brubeck. "I think every person who has ever worn a military uniform can relate to my story."

For those who remember the war years, this music will likely evoke a strange mixture of melancholy and happiness. But for those of us who grew up as baby boomers, this was the music of our parents. It possesses an almost mythical quality that transports us back to a time of unbridled anticipation, naive innocence and social awakening.

The fourteen tracks recorded in January of this year are a study in the refined elegance that typifies Brubeck's playing. Made more poignant by the lack of accompaniment, Private Brubeck Remembers opens with a reflective "For All We Know" that seemingly captures the spirit of the entire project. This Brubeck offering seems in stark contrast to the complex time signatures of his most popular works "Take Five" and "Blue Rondo a la Turk" but any true student of Brubeck will undoubtedly feel at home.

Richard Rogers' "Where or When" is another selection that emphasizes the point that sometimes the beauty in a performance is not in how much you play, but rather in how little you play. Brubeck's phrasing breathes new life into an old standard and makes use of space in a most eloquent fashion. Among other selections is Jerome Kern's "The Last Time I Saw Paris" that starts in an almost carnival-like fashion, but finishes with a modern, slightly up-tempo flair.

Other selections include "For All We Know," "Don't Sit Under the Apple Tree (With Anyone Else But Me)," and Cole Porter's "You'd Be So Nice To Come Home To." Also included is a pair of Brubeck originals, both penned during the last years of the war. In a foreshadowing of future experimentation with tempo, "We Crossed the Rhine" is built on the rhythm of heavy equipment trucks crossing the bridge at Remagen, while "Weep No More" is a ballad that Brubeck wrote for his wife, Iola, after Germany surrendered and the war in Europe was over.

In this age of technology where "audio sweetening" and "post-production" techniques yield sellable results from not-so-sellable performances, it is refreshing to hear an artist such as Brubeck stripped down to the basics, revealing only the artistry of the music and the musician.

In addition to the tracks themselves, Private Brubeck Remembers also includes numerous WWII-era photos and an interview between Brubeck and former CBS News anchor Walter Cronkite. Spanning nearly an hour, the interview includes Brubeck's memories of his war years—as a musician and as a GI. Perhaps this release will spawn a series of similar projects where artists of historic significance commit their personal stories to disc for future generations to hear.