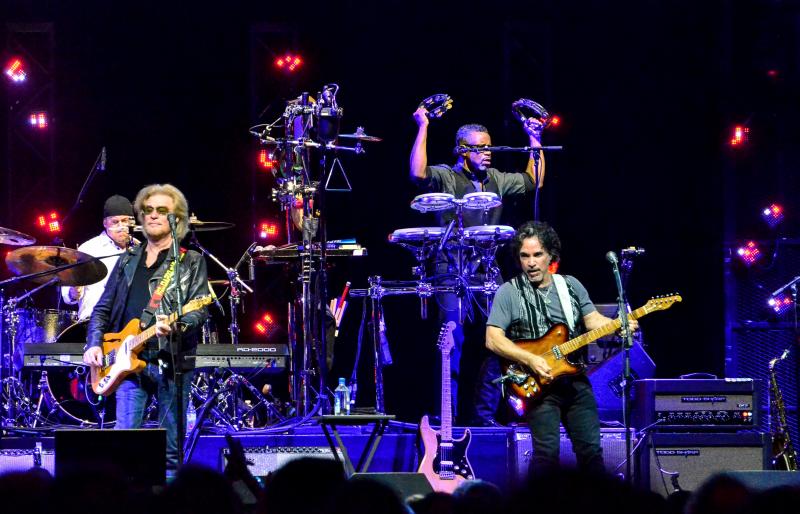 On a pleasant Saturday evening in mid-June, the Hall & Oates/Tears For Fears co-headlining tour made its way to NJ's Prudential Center. It was definitely pop and soul night in Newark.

The evening began with a dose of Pacific Northwestern soul and R&B as Allen Stone took the stage all by his lonesome accompanied by an electric guitar and the occasional tape loop. The singer, who sees himself as a "hippie with soul," is traveling light and without his band as he accompanies Hall & Oates and Tears For Fears on their North American sojourn. Stone began the evening by stating, "I'm going to play some songs for you tonight, but you're in for a treat. Tears For Fears and Hall & Oates are fantastic. I've been watching them every night from the wings and they are amazing. I'm just blown away." Stone, who was clearly elated to share the stage with the Rock 'n' Roll Hall of Famers and the legendary pop rock band, delivered a stellar short set highlighted by his performances of "Love" and "Upside Down"

Tears For Fears, the British band formed by Curt Smith (vocals and bass) and Roland Orzabal (guitar and vocals) in 1981, was initially seen as a new wave synthesizer band. Eventually the public and critics came to realize that the group was much more. The band is now seen, because of its Beatles-esque melodies, song construction and arrangements, as a rock and pop group. As part of the Second Invasion (popularized and driven by MTV), Tears For Fears found immediate success with its platinum-selling debut album, The Hurting (Mercury/Phonogram, 1983), which reached number one on the UK Albums Chart. Its second album, Songs From the Big Chair (Fontana/Mercury/Phonogram, 1985), propelled by the mega-hit singles "Everybody Wants to Rule the World," "Shout" and "Head over Heels," reached number one on the US Billboard 200. Songs From the Big Chair achieved multi-platinum status in both the UK and the US. Smith and Orzabal parted ways in 1991, following the release of their third platinum-selling album The Seeds of Love (Fontana/Mercury/Phonogram, 1989). Orzabal continued to use the Tears for Fears name throughout the '90s (with a group of mercenary musicians backing him). The duo re-formed in 2000 and released an album of new material, Everybody Loves a Happy Ending (New Door, 2004). Secret World: Live In Paris was released in 2006 on XIII Bis Records. In the ensuing years Tears For Fears has toured the world and is currently working on a new CD. During the course of its career, Tears for Fears has sold over 30 million albums worldwide.

When Tears For Fears took the stage, the mostly middle-aged crowd in the sold-out arena became almost delirious. Appearing onstage to a backdrop bathed in slowly rotating colors of light and darkness while Lorde's eerie, almost gothic dirge-like version of "Everybody Wants To Rule The World" teased the crowd for a tantalizing two minutes, Smith, Orzabal and their band took their places and paused for a moment. When the lights came up it was an engage the throttle, full speed ahead moment as the band launched into a powerful version of the song with the sweet-voiced Smith singing it as it was intended. Audience members rose to their feet and remained standing dancing, swaying and singing along with the band during the anthem (and every other song during the 13 song performance). As the final notes played, fans offered up whistles and a lengthy round of applause.

When the applause died down Smith, Orzabal and the band delivered a very poppy version of "I Have A Secret" that showed their Beatles influence by featuring a snippet ("Somebody's knockin' at the door, somebody's ringin' the bell") from Paul McCartney's "Let 'Em In." The show then continued with the very Beatles-esque "Sowing The Seeds of Love," and note-perfect pristine versions of "Advice For the Young At Heart" and "Everybody Wants a Happy Ending."

When Smith finally addressed the crowd, he said, "Hello! Thank you! Good evening, New York! It's nice of you to get here early for us...We released our first album quite a while ago. We'd like to do a few songs from our first album." He made the statement about playing in New York (even though the arena is just across the river in Newark) and the crowd didn't care. It jumped to its feet and erupted into prolonged applause.

"Change," "Mad World" and "Memories Fade" were all embraced by the audience as long lost friends. There was a mixture of nostalgia and extreme happiness as the faithful sang along with the band and thrust their arms (as though they were brandishing tomahawks) to and fro along with the beat. Smith and Orzabal's intertwined vocals were magical and magnetic. The crowd members were literally leaning forward while the band played, the palpable energy reaching the stage and being sent right back out to the rafters.

The band is known for choosing interesting cover songs. It is almost as though Tears For Fears pick cover songs that are not the "same-old, same-old" songs that many bands do. Orzabal and Smith seem to choose well-known songs that are a bit off the beaten track of the "usual." The band has been known to perform Michael Jackson's "Billie Jean," Arcade Fire's "Ready To Start" and the Beatles' "All You Need Is Love." On this tour, the band covers Radiohead's "Creep" with Orzabal's vocals delivering just the right amount of atmosphere and moodiness. It was a flawless rendition and, of course, the audience sang along.

The stunning main set concluded with Smith providing a fantastic version of "Pale Shelter," a very nice version of "Break It Down Again" from Elemental (Mercury/Phonogram, 1993), which represented the lone song from the Orzabal-only era of the band, and a stunning version of "Head Over Heels" that rang true and proved timeless. In fact, when the song came to its conclusion, the crowd delivered the final "time flies" words of the song.

The encore was preceded by band introductions. Smith gave props to "the Reverend Charlton Pettus on guitar, on drums the one and only Jamie Wollam, NJ resident, Mr. Doug Petty on keys and Carina Round on vocals." He paused and simply said, "Oh yeah, this is Roland. My name's Curt and we're Tears For Fears. Thank you very much!" What followed was a rousing rendition of "Shout" augmented by audience participation and the stage lights flooding the audience members as they sang-along while turning the clock back over 30 years. Underneath a color changing neon set of squares that hung above the stage like a set of UFOs, Orzabal and Smith powered through the vocals and forcefully stomped through the well-known anthem with a renewed energy that was even more pronounced than they possessed three decades ago. Everything old is new again and the audience shouted the words as if protesting against the things that bother them. As the last notes died down, Orzabal stepped forward and said, "Thank you so much." He, Smith and the band took their bows waved good-bye and were gone in a flash, the catharsis and joy apparent on the band's faces as well as everyone who witnessed the spectacle of their set.

After a short intermission, Daryl Hall & John Oates and their band delivered a powerful set of blue-eyed Philly Soul. When the band appeared, Hall and Oates were the epitome of cool as they came front and center. Rocking a leather jacket with aviator shades, the 70-year-old Daryl Hall still looks stylish almost 50 years down the road. John Oates looked comfortable in his own skin wearing a t-shirt and jeans.

When the band hit the first notes of the opening song, the crowd, which had been worked into a near frenzy by Tears For Fears, remained in party mode. Hall & Oates' version of party mode on this night began with "Family Man." A nearby audience member was overheard telling her significant other, "Wow, I forgot about this one. What a great song."

After rocking versions of "Maneater" (featuring a fabulous saxophone solo supplied by Charlie "Mr Casual" DeChant) and "Out Of Touch," Hall addressed the crowd. He said, "Good to see everybody. How you all doing? We're gonna play you a song from the Rock 'n Soul (RCA Records, 1983) album, Ok?" The band then played "Say It Isn't So." Hall, who was obviously in a chatty and impish mood, again addressed the crowd while chiding DeChant and teasing him about his lamé sports coat. Hall asked the audience to "check out Charlie's jacket. He got it this afternoon right here in Newark. No kidding. You should feel the material. Pure Plastic." Everybody on stage, including DeChant, and in the audience had a good chuckle. If the audience wasn't already thrilled to be there, Hall & Oates sent them further out on the ledge with spot-on versions of the Righteous Brothers' "You've Lost That Lovin' Feelin'" (originally covered on the 1980 RCA Records release Voices), "One On One" and the R&B flavored "She's Gone." Hall then moved to the grand piano for a stellar version of the melancholy "Sara Smile" (prior to which he complimented the venue for having the instrument in- house).

The show was very much a greatest hits set featuring hit singles released by the duo during its '70s and '80s heyday. The lone exception was the Oates-penned and sung "Is It A Star," an album track from War Babies (Atlantic Records, 1974). Hall introduced the song as "one of John's from that album that I thought was very cool." The main set ended with an extended jamming version of "I Can't Go For That (No Can Do)" featuring DeChant's excellent sax work.

If the main set seemed a bit short, Hall & Oates made up for it with a four song encore of classics. The first was the oldest song of the quartet of hits—"Rich Girl." "Kiss On My List" and "Private Eyes" followed, all the while pushing the crazed crowd into a feverish state. Finally, in keeping with the theme of the evening, a sing-along version of "You Make My Dreams Come True" closed out the show.

Hall & Oates' performance could best described as "Chock Full O' Hits." The duo and their bandmates (Shane Theriot on guitar, Porter Carroll Jr., on percussion, Brian Dunne on drums, Eliot Lewis on keyboards, Klyde Jones on bass and multi-instrumentalist DeChant on flute, percussion and additional keyboards) provided the fans with a trip down memory lane. The beauty of this trip was the fact that the vibrancy of the performance allowed the audience to remain right here in the present all the while.