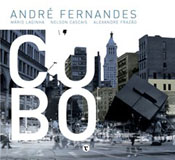 The young, thirty-one year old Portuguese guitarist Andre Fernandes has control of his destiny, putting a multitude of factors in play to foster his own creativity as well as those of his talented cohorts. Like the protagonist of a self-help program, Fernandes engages in activities (like heading up his TOAP imprint) that engender circumstances allowing desired results to flourish—in this case a string of gorgeous small-group jazz sessions on TOAP. He also leads by example, as each successive release raises the bar for his labelmates.

Cubo builds on the outstanding Timbuktu (Tone of a Pitch, 2006) with an equally compelling set by his new band. Last time, he relied heavily on the contributions of American keyboardist Pete Rende for inspiration. Now Portugal's most renowned pianist, Mario Laginha, known for his longstanding association with chanteuse Maria Joao, has taken the giant step of joining forces with Fernandes. He's all over this recording as consummate soloist and colorist, showing ravenous capacity for the creative license allowed herein.

How to explain and differentiate Fernandes' thing? It involves erudite modern jazz infused by a respect for the attitude and mood of modern rock, spiced with touches of jazz "outness" coming solely from a colorist's perspective. There's little evidence of sounds associated with the country—no Samba , no Bossa, no Fado—but anyone can hear a freshness inspired by the particular song of the Portuguese Ocean, or the breezes that lift the weight of the air there in summer. It is its own uplifting, transporting, sumptuous, very sensual thing.

These descriptors will mean more when listening to "Sal," beginning with Laginha's arpeggiated waves, driven by the syncopations of Nelson Cascais on electric bass, floated out by the ride cymbal of Alexandre Frazao. Surprisingly, Fernandes adds his own chorus, not with the guitar effects pedals he's mastered, but via multitracked vocals, his volume-swelled guitar adding dramatic arc. Before we know it, our listening environment becomes complicated, an ostinato guitar figure morphing into a head full of notes. Fernandes' transitions are truly seamless, his motific allusions illusory. Attention may be diverted, an effect softened, before you're swept into something else—like his magnificent solo, grown slowly, as Fernandes often does, from a seed germinated only when the song is stripped back to a pulse. Laginha goes skeletal, so the bass pulse and voices may better abet Fernandes' ascent. Building out of a reverb drenched sound spiced with rock inflections and arching through more note clusters fueled by added distortion, the piece then feathers in the sound of Fernandes' trademark harmonizer. It's this real-time improvisation, with tone coloration at the same time as linear information, that makes Fernandes so compelling a soloist.

Yes, this is the same band that can segue to "Perto," or "Near," accomplishing no less than conveying the sentiment of the word with simple strumming of acoustic guitar and filigree from the piano. The guitar solo is nearly superfluous, yet somehow captivating. Doesn't that define compulsive listening? So does Andre Fernandes.