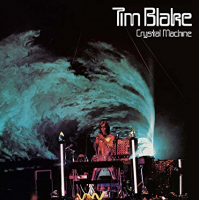 British synthesizer ace Tim Blake was the artist who created all those bizarre and textured synth sounds for prog rock acolytes, Gong from 1972-1975. He later joined legendary space rock band Hawkwind in 1979 for a spell, but connected with French lighting stylist Patrice Warrener to develop Crystal Machine, which of course, is the title of this album that includes two live works in tandem with the latter's light show and bonus tracks. Digitally remastered with original artwork and insightful text provides a historic composite of Blake's artistic focus, collaborations and musical ideologies, the album was originally produced by the French, Egg label in 1977. And it precedes his equally harmonious and prismatic New Jerusalem (Cherry Red, reissued 1978), tinted by his low-key and rather affectionate vocalizing.

Blake presses all the right buttons, so to speak. Hence, his lyrically rich themes and buoyant undercurrents add to the galactic stream of consciousness he imparts on a per-track basis. For example, the opener "Midnight," highlights the artist's wholesome analogue sound swashes with a lovely and somewhat mesmeric hook that cycles atop streaming backdrops. Akin to the German space-rock band Tangerine Dream, who also burst onto the scene during the 70s, Blake ingrains rhythmic undercurrents and ambient shadings across broad or gracefully executed panoramas.

"The Last ride of the Boogie Child" was recorded live in 1976 at a British festival and is designed with whispery passages, understated vocals and a popping synth groove. Again, Blake morphs hummable melodic content into his works amid airy dreamscapes, although his mode of delivery is not sedate or one-dimensional. "Synthese Intemporel was recorded in 1977 at Le Palace Theatre Paris. Here, Blake blends sinewy and vibrating lead lines into a circular pulse, summoning notions of a medium-tempo space-rock hoedown. But one of three bonus tracks "Surf," is easily the most radio-friendly piece via its finger-snapping grooves and hummable primary theme. Indeed, the program rekindles the glory days of prog rock and electronica and still generates magnetic attributes forty-years after its inception.