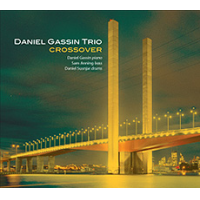 Described as a "brilliant, lyrical young Melbourne pianist/composer," Australian jazz pianist Daniel Gassin reveals but a glimpse of his talents on Crossover, as evidenced by the quality of his compositions and the elite caliber of his performance. A follow up to his debut, Roundtrip (Vorticity Music, 2004)—which was rereleased in 2010—Crossover is an enchanting recording of modern jazz, featuring one of the most unheralded young pianist in jazz today. As with his first album, this also adopts the piano trio format, with two new players rounding out the rhythm section.

Joining Gassin on this adventure is Sam Anning, one of the most sought after bassists in Melbourne and named the 2008 Young Australian Musician of the Year. A previous Henry Mancini Fellow at the University of Miami Frost School of Music, Australian drummer Daniel Susnjar does the honors on the skins and sticks. Together, the Daniel Gassin Trio produces an excellent cool and modern jazzy sound, making each piece a keeper, with no fillers, as every tune is worthy of airplay. Opening up in impressive style, Gassin chooses the sizzling up-tempo "Freefall" to introduce his music, instantly grabbing attention with its fiery approach. The pianist goes it alone and plays softly for the first two minutes of the introspective title track, which quickly changes directions and takes the high, hot road to a jazz burner of a tune.

Anning is the featured soloist on "7a Arrondissement," though drummer Susnjar also takes his turn with a rumble of his own. The mellow, ballad-like "Release" provides Gassin with an opportunity to infuse a classical element into the music, as he delivers yet another strong performance. The brisk, fast-paced and energetic "Middle Man" is one of the finer moments on the album, with Gassin's runs amongst his best, while Anning delivers more firm bass lines as Susnjar's splashes and brush work complete the piece.

The music winds down with Enrico Pieranunzi's "Don't Forget The Poet" and an absolutely beautiful solo piano performance of Jimmy Rowles' "The Peacocks." The landscape of jazz music contains a plethora of piano trio performances, many of which are mediocre, some just plain bad and a few that measure up to an elite standard. Crossover deserves to be elevated into that elite category, with Daniel Gassin the primary reason.