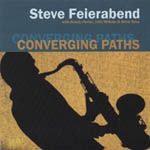 Steve Feierabend has a way of visualising his music. The saxophonist called his previous album Revolving Doors, a hint about the direction of his music. There is nothing static in his music, and that direction continues here. He forges his pieces strongly on improvisation and different time signatures, evolving constantly and most often coming to a satisfactory conclusion.

Feierabend sets the pace and the tone right away with "Converging Paths, a tune that was inspired by Dave Holland and Chris Potter. He explores an odd time signature on the opening segment, venting a 10/4 beat on the saxophone that essays the melody with a gentle air. His playing cuts into a deeper edge before he slips into a swing mode, changing the pulse to bring in some nifty changes. The feel is extended by Erik Jekabson on the flugelhorn, but pianist Randy Porter diffuses the density to give the tune a fine balance.

The intensity of bebop courses through "Welcoming. Feierabend carves the first notch and Porter stretches the picture, but Akira Tana adds some of the finer splashes on the drums, his cymbal accents creating a whirl of colourful motifs. Feierabend caresses the melody of "Blue Skies. He is poised in his approach, even as he seeks out the road to improvisation. He and Porter extend the bridge of the song without detracting from its impact. At the end, it fits in nicely as a respectful nod to a well-loved standard.