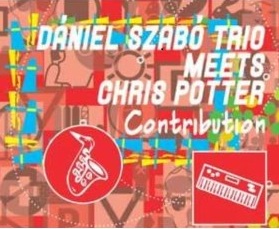 In the sublime world of Dániel Szabo, invention is the key. This is how the prodigiously talented pianist and composer helps guide his trio and guest, Chris Potter through his challenging compositions on Contribution. Although Szabo likes to retreat to a musical place that is somewhat like a humble hermitage, his is the voice that defines this album; his is the guiding spirit that draws the music from the souls of his ensemble—the astounding, virtuoso bassist, Mátyás Szandai and drummer extraordinaire, Ferenc Németh—as well as from the deep and brooding soul of multi-reedman Potter. There are some key reasons why Szabo has such a magnetic effect on the musicians with whom he plays, as well as an ability to mesmerize his audience unlike most pianists who have come before him or are his peers.

Dániel Szabo has astounding touch. His fingers seem to have hydraulics of their own. He is able to strike keys with so profound a touch that they seem to sing and sigh with equal beauty under his touch. He plays with startling expression, sometimes racing along the keys with the use of the damper pedal opening the ears of the heart with broad resonant echoes of notes that cascade like a brook coursing ecstatically down a hillside; then he will arrest everything with the una corda, bringing all sound to a soft cantering stop. His ideas flow as if like a river in flood. Szabo may take single notes as the beginning of a phrase that he seems to fancy, then roll them into fantastical arpeggios and runs that traipse with abandon across hill and dale in the musical landscape. He eggs his musicians on to do likewise and they often respond with such fervor as if following an evangelical call.

All of this, of course, results in music that is intriguing and rewarding. Whether it be the wild intervallic leaps on "Attack of the Intervals" or the mystique of "Strange Winds," where Szabo, Potter and the rest of the group navigate a sonic palette so brushed with subtlety of shade, tone and timbral magnificence that the music could stop the very breath. Then there is the loping rhythm of "Camel Gallop," a piece of music so vivid that it appears the musicians form a mirage on a desert skyline. "Melodic" is actually driven by Szabo's silken touch and Potter's hypnotic harmonies from the depths of his bass clarinet, so it is rich in overtones and, ironically, overlaid harmonies so dense that these, happily, almost bury the original intersine melody. "Whirligig" is tantalizing; its melody made razor-sharp by the high and mighty soprano of Potter. Ferenc Németh and Mátyás Szandai are astonishingly supportive as well as brilliantly individualistic throughout, especially on the aforementioned song as well as on "There was That Too" and "Bubble Song."

This is musicianship of the highest order from a composer who is able to challenge musicians to reach deep into their souls to produce art that is priceless.

Attack of the Intervals; Strange Winds; Camel Gallop; Melodic; Whirligig; There Was That Too; Bubble Song.