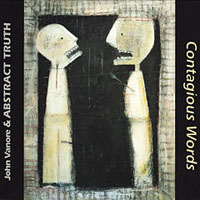 John Vanore & Abstract Truth's Contagious Words has the qualities of either a small big-band date or a big small-band date, depending on the perspective. There are twelve musicians listed on every track, and five more who show up for a few tracks each. That certainly has the instrumental mix for a full big band sound, but Vanore, who plays trumpet and composed most of the tracks on the album, uses the full power of the orchestra judiciously.

The writing is complicated enough to sound modern and highly crafted, but remains accessible enough to retain fans of easier-on-the-ears music. The melodies range from quirky to straightforward to abstract, and almost everywhere in between, with rich orchestration throughout. "Dreams" possesses a slow jam feel, first featuring guitarist Greg Kettinger, then Vanore, using the greater horn section only sporadically in support of the soloists. "Recess," on the other hand, features a more fully realized orchestral statement, morphing into the album's most abstract track, with well-regulated discord closing it out.

As a soloist, Vanore plays his horn open with a bright, searching tone. Kettinger adds some really fine fretwork throughout. Tenorist Bob Howell opens "Restless" with a keening free improvisation, before the full band loudly bursts in, returning to take a fine, straight-ahead turn. With this many musicians involved there isn't enough space to give a shout-out to all of them, but everyone involved is really on top of this music.

It's nice to see the leader of a larger ensemble leave so much space for his band mates to work out. Although he's the leader, Vanore is only listed as a soloist on four tracks, taking care to credit all of the soloists individually in the album notes. In an egalitarian touch, he also ensures that the band lays out, for the most part, during solos, allowing the individuals a little limelight.

Contagious Words is a strong example of what a thoroughly modern large jazz ensemble can accomplish: great music with fascinating arrangements and first-rate individual performances. There should be more orchestras like this one.