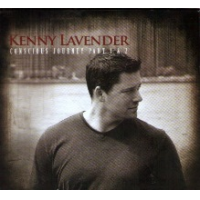 Texas-born, New York-based trumpeter Kenny Lavender is as versatile as can be. He's put his horn to good use on Broadway, playing lead trumpet on Bullets Over Broadway and working in the pit orchestras of other hit shows like The Drowsy Chaperone and West Side Story; he's backed up old pros like Frankie Valli, The Temptations, and Johnny Mathis; and he's screamed and roared in the trumpet section of jazz groups like The Birdland Big Band and The Chico O'Farrill Orchestra. Now he adds more credits to the list, serving as leader, composer, arranger, and focal point on his own big band date.

With more than ninety-five minutes of big band music spread across two discs, Conscious Journey Part 1 & 2 is about as ambitious as a debut can be. Lavender put together an autobiographical program of music, brought together some of his fellow big band travelers, super sidemen and contemporaries, and got down to the business of making music. And what fun music it is. Lavender and company kick right of the gate on "Velocity," slyly move through "Down In NOLA," strut along in funky fashion on "9th Ave Swag," and gently glide along during "Flow Through Me." Along the way, Lavender also looks back on the highs and lows during the first decade of his relationship with his wife on "Beauty In A Kiss," tips his cap to trumpet icon Clark Terry with "Clark's Bark," and makes multiple nods to the work of Harry Connick Jr.

Lavender enjoys being the center of attention at his own party, soloing on the large majority of these tracks and putting his vocals to good use in several places. As a trumpeter, he's solid as a rock in every respect; chops, creativity, emotion, and lyricism seem to effortlessly come from his horn like water flowing down a stream. His vocal work, completely charming at its best (i.e. "I Could Write A Book"), occasionally suffers from a bit of crooner-ish affectation. That aside, Lavender makes quite an impact as a complete-package musician here, fronting his own band as singer and instrumentalist, putting together all of the material, and contracting his own super band that's populated by plenty of other strong personalities. Note the killer solo from Kurt Bacher on clarinet during "Down In NOLA," Phil Palombi's beautifully measured bass solo on "Flow Through Me," Nathan Childers' straight down the middle work on "Velocity," and the pleasing run of soloists on the album-ending take on trumpeter Kenny Dorham's "Una Mas." There's no shortage of strong individual statements and fine section work here. Conscious Journey Part 1 & 2 is simply full of musicality, as is Kenny Lavender, the man behind the music.

Disc 1: Velocity; As I Close My Eyes; Beauty in a Kiss; Down in NOLA; 9th Ave. Swag; Flow Through Me. Disc2: Caravan; I Could Write a Book; Happiness; Clark’s Bark; Una Mas.